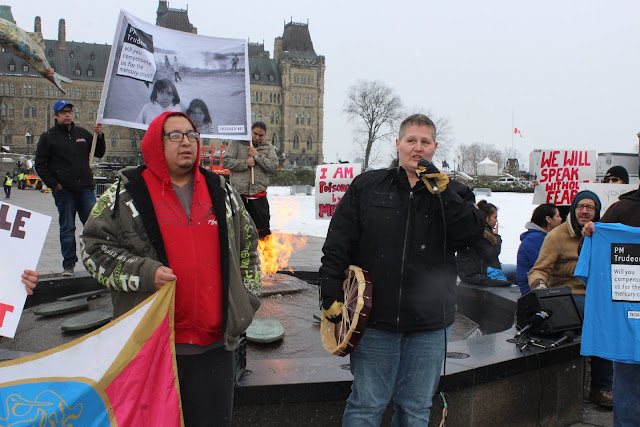 Labrador Land Protector Denise Cole (holding drum) shows solidarity with the people of Grassy Narrows, knowing full well that the future downstream of Muskrat Falls is one full of methylmercury poisoning unless the federally-supported megadam is halted.

Two weeks ago on Parliament Hill, I stood with members of a northern Ontario Indigenous community dying from mercury poisoning. Along with youth and parents from Grassy Narrows, Chief Rudy Turtle and indefatigable community leader Judy Da Silva had traveled a great distance to demand that Prime Minister Trudeau ensure proper compensation and care for their long-suffering people.

As I imagined enduring the half-century of inter-generational neurotoxin poisoning that continues to plague Grassy Narrows, I sadly concluded that we rarely learn from the worst aspects of our history. Indeed, as we cry “never again,” the Inuit and Innu of Labrador face a future that could well mirror the Grassy Narrows experience.

The federal government is backstopping the hugely controversial Muskrat Falls mega-dam with $9.2 billion in loan guarantees, despite never having received the free, prior and informed consent of all Indigenous people affected. Critically, Ottawa insistently ignores a 2016 Harvard University study that concluded major spikes in methylmercury poisoning will contaminate the traditional country food web relied upon by Indigenous people since time immemorial. 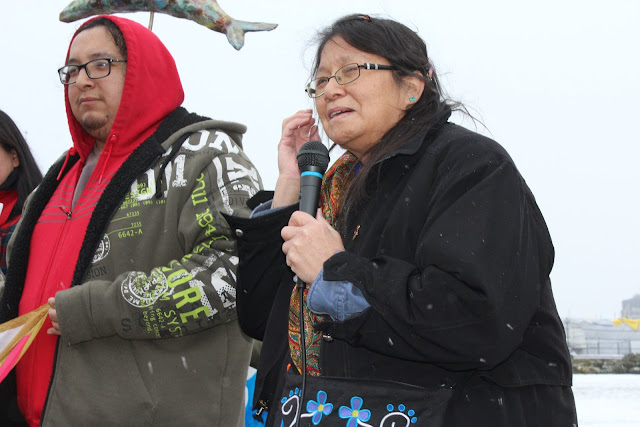 The indefatigable Grassy Narrows community leader Judy Da Silva speaking at yet another trip to Ottawa to demand compensation and proper care for a community still suffering after a half-century battle to clean up the soil and waters.

In relatively remote communities where store-bought food is beyond affordable for many residents, the impossible choice will be going hungry or taking risks by harvesting dangerously contaminated foods.


This preventable poisoning stems from the refusal of Newfoundland and Labrador, their federal backers, and provincial Crown corporation Nalcor to undertake significant clearance of trees, vegetation, and topsoil in the Muskrat Falls reservoir area, which is slated for completion in 2019. Scientists predict that submerged inorganic mercury compounds will begin to “methylate” and produce a neurotoxin, methylmercury, that rapidly bioaccumulates at “concentrations of a million times or more those present in water” in the fish, waterfowl, and marine mammals that make up a large percentage of the downstream Indigenous diet.

In 2011, a joint federal-provincial panel called for “a precautionary approach [at Muskrat Falls] particularly because no feasible adaptive management measures have been identified to reverse either long-term adverse ecological changes or mercury contamination of renewable resources,” a recommendation that continues to be dismissed.

Instead, the Indigenous people downstream of Muskrat Falls were advised earlier this year by an Independent Experts Advisory Committee to negotiate a fund “to compensate for lost food and traditional harvesting practices, and for the associated physical and mental health impacts of this loss.” But how can anyone place a monetary amount on the loss of a culture, spirituality, and social fabric so intimately tied up with practices of harvesting country foods that reaffirm Indigenous identity and connection to the land and water? 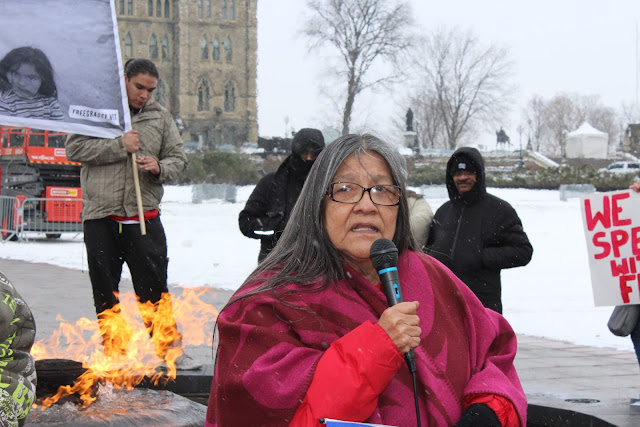 Rita Monias of Pimicikamak Okimawin spoke about the devastation, including methylmercury poisoning, caused by Manitoba Hydro dams that never received free, prior and informed consent of Indigenous people. "Look around," she said. "These children and grandchildren are poisoned."


As if that were not enough, project critics have raised major concerns about the instability of the North Spur, a natural formation that, despite being composed of quick clay (sand that liquefies and moves under pressure), is being relied upon to hold back the intense pressure of a full dam reservoir. The fears of catastrophic dam break and mass casualty flooding are real – there are reports of individuals in the flood zone going to bed with life preservers under their beds – while leading Swedish quick clay expert Stig Bernander recently wrote that “the safety and reliability of the Muskrat Falls dam have not been demonstrated.”

A public inquiry into why the Muskrat Falls mega-dam ballooned to twice its original cost is ongoing in Newfoundland and Labrador, but its mandate is limited to financial and bureaucratic issues, avoiding the very real human rights and environmental concerns that have been raised by groups like the Labrador Land Protectors and Grand Riverkeeper, many of whose members still face civil and criminal charges for nonviolent acts of land and water protection. As critics of the inquiry point out, even the limited lessons that may arise from the inquiry will be too late:  the dam will be complete before its final report.

When Justin Trudeau apologized in 2017 for the cultural genocide of Labrador residential schools, my friend Marjorie Flowers, an Inuk survivor of that devastating system, shared with me her mixed feelings. Fresh from ten days in a maximum security prison where she’d been sent for her peaceful acts of resistance to the mega-dam, she said: “I won't discredit the value in an apology, but I’m puzzled at how the same government is perpetrating a disaster against the environment and our culture. This Muskrat Falls project is putting our lives in peril. There is a huge contradiction.”

When Marjorie came to Parliament Hill last May and tried to enter the House of Commons with the pictures and words of those most at risk from Muskrat Falls, she was handcuffed, charged, and banned for 90 days from the vicinity. Like many in Labrador, she feels at her wit’s end. At home, an injunction threatens further jail time for any interference with a project that threatens their cultural survival. In Ottawa, she and other dam opponents face arrests and Parliamentary bans for seeking an audience from the biggest backers of Muskrat Falls.

The people of Grassy Narrows have fought 50 years for mercury justice, and recognize that their battle is far from over. Is a half century-long battle just beginning for the Inuit and Innu of Labrador because Indigenous lives continue to be treated as disposable in this country? 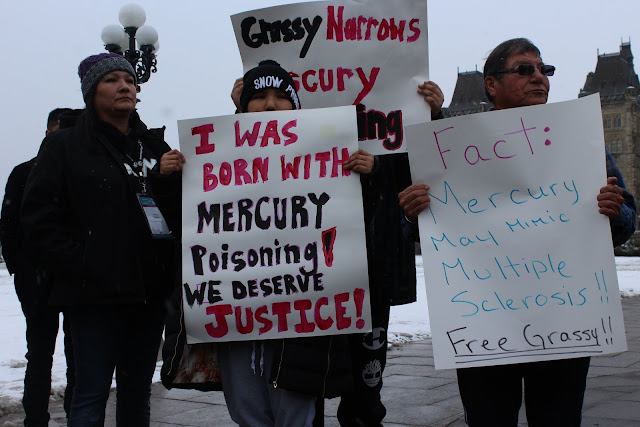 The federal government and province of Ontario still refuse to name the cause of so many premature deaths at Grassy Narrows: mercury poisoning.