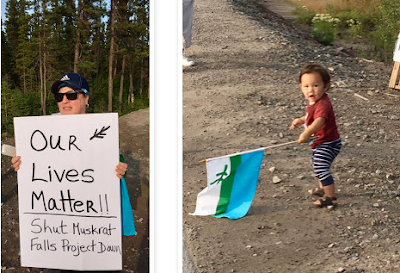 OTTAWA – On Monday, May 7, Labrador Inuk elders who have journeyed thousands of kilometres will be joined by supporters as they gather to rally on Parliament Hill at 11 am, following which they will attempt to nonviolently enter the House of Commons and physically place on the desks of all 343 MPs the pictures and words of those most at risk from the lethal effects of the Muskrat Falls megadam. It is part of a national day of action that will also witness demonstrations in Winnipeg, Goose Bay, Halifax, and St. John's.

A March to the Hill begins shortly after 10 am from the Human Rights Monument (Lisgar and Elgin).

The controversial $13-billion dam has been widely criticized for recklessly endangering the health and well-being of the largely Indigenous population who live downstream, as well as that of non-Indigenous residents. Core concerns include major spikes in methylmercury poisoning of a country food web that has always been critical to the social, cultural, physical, psychological, and spiritual well-being of the Inuit and Innu peoples. The dam's proponent, crown corporation Nalcor Energy, refuses to properly clear vegetation and soil in the area that will be flooded (the dangerous neurotoxin methylmercury is released through the decomposition of organic materials once under water).

Opponents are also concerned about the potential for a catastrophic dam break: a large natural formation known as the North Spur is being relied upon as a significant portion of the dam's reservoir, but it is largely composed of quick clay, or sand that moves and liquefies under pressure. The world's leading expert on quick clay, Dr. Stig Bernander, has studied the dam and concluded that Nalcor has failed to perform the proper tests to ensure that the North Spur is stable enough to be safe.

Nunatukavut Elders Jim Learning, aged 79, and Eldred Davis, as well as Labrador Land Protector Marjorie Flowers – all of whom spent 10 days in a maximum security Newfoundland prison last summer for peaceful acts of land protection – will lead the May 7 rally, having driven over 2,000 km to deliver a very strong message. Along with a group of supporters trained in nonviolence, they will carry the pictures of people in Labrador whose voices have yet to be heard by the megadam's single biggest investor: a federal government that is continuing to discard its responsibility to seek the free, prior and informed consent of all Indigenous people affected, and which is also ignoring the science which clearly documents significant risk. Angus Andersen, an Inuk man originally from Nain, is also attending, with plans to hand Parliamentarians symbolic bottles of "Muskrat Falls Methylmercury Water."

"They are destroying ways of life that have existed since time immemorial and putting people's lives at risk with a project that even the Nalcor CEO admits is a boondoggle that should never have been built," says Learning. "We need to let all people in Canada know that they are on the hook for this project, which is likely to bankrupt Newfoundland and Labrador and poison a population that is 90% Indigenous. Is this what the Trudeau government thinks truth and reconciliation is about? He came to Labrador to apologize for the genocide of residential schools, but he's backstopping a new genocide with over $9 billion."

In 2016, a four-year, peer-reviewed study by Harvard University clearly illustrated the disastrous consequences expected to result if the Muskrat Falls megadam goes online as expected in 2020. Even with clearance of vegetation and soil, however, there is no guarantee that methylmercury can be contained, and Ottawa recently signed off on a recommendation that Indigenous people start negotiating a compensation fund to make up for the loss cultures that have existed since time immemorial.

"This is not like replacing a toothbrush or a DVD player, this is about losing a cultural and spiritual connection to the land, water, and food web that we have always relied on," says Labrador Land Protector Denise Cole, one of scores of individuals who have been charged for peacefully resisting the project. "Nothing can compensate for the loss of what makes us who we are. Our identity is being poisoned, and many of our people are experiencing the trauma induced by fear: fear that our way of life will disappear in a generation, and the more immediate fear that keeps people sleeping with life jackets under their bed, which is the risk of a catastrophic dam break and flash flood."

Matthew Behrens, an organizer of the Ottawa event (put together by the Ontario-Muskrat Solidarity Coalition), hopes that the Parliament Hill civil disobedience will draw national attention to the fact that all Canadians have an interest in the outcome of Muskrat Falls, from its failure to be consistent with the calls to action of the Truth and Reconciliation Commission to the $9.2 billion in loan guarantees backstopping the project.

"With this megadam, the future in Labrador looks like the present in Ontario at Grassy Narrows and Wabaseemoong First Nations, an act of genocide via mercury poisoning," says Behrens. "It is clear that Indigenous people and non-Indigenous people alike are being asked to accept the unacceptable: that their traditional food web will be poisoned, and their lands and waters will be turned into a national sacrifice zone. Our May 7 efforts are part of a lengthy campaign to say it's not too late to do what's right and shut this project down."

Please share and look for the event closest to you

MAY 7th, 2018 National Day of Action to #ShutMuskratDown
EVENT SCHEDULE!

Labrador Land Protectors and Grand Riverkeeper Labrador are incredibly humbled and grateful to those who are responding in such a powerful way to our call for solidarity in a National Day of Action to #ShutMuskratDown in partnership with our allies at the Ontario-Muskrat Solidarity Coalition!!