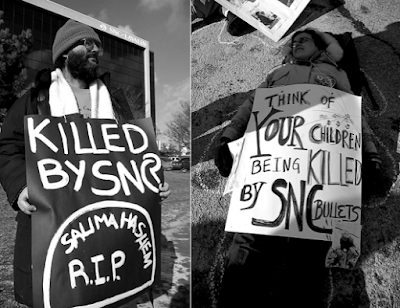 TORONTO, MARCH 21, 2005 -- All the 10 or so members of Homes not Bombs wanted to do today was have a dialogue on ending SNC-Lavalin's participation in the war crimes being committed in Iraq and Afghanistan. SNC-Lavalin profits handily from its Quebec-based SNC-TEC subsidiary, which is providing hundreds of millions of bullets to U.S. occupation forces across the globe.

But SNC-Lavalin management would have none of it, preferring to treat Homes not Bombs as a security threat. In their largest display of force yet, some three dozen Metro Police, eight wearing riot visors and riding horses -- backed up with two police wagons ready to cart folks away -- were on hand early today at the Etobicoke offices of the firm, which has been the site of two prior, peaceful protests.
All this for a group of ten people with placards and flyers calling for an end to the profits being made from war crimes. And just to make sure we got the point, police immediately accosted the small group as we walked towards the western driveway to the offices. The officer in charge told us that the company had pre-issued trespass notices against us "that would be enforced," and another officer took it upon himself to single out one demonstrator, grabbing him by the arm, without explanation, and proceeding to shove him around. The officer then threatened to attack another demonstrator for standing on the sidewalk.

"Move, how many times do I have to tell you, you're blocking the driveway!" he thundered at her.

She reminded him that his police cars were in fact blocking the driveway and that she was simply standing on the sidewalk. Despite his repeated thundering at her, she stood her ground, staring him down until he backed off. 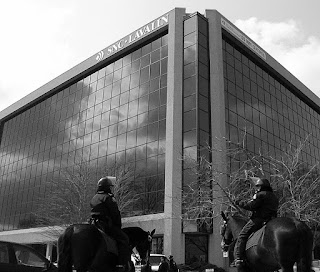 Indeed, police cars blocked both entrances, and a row of squad cars was lined up at the front entrance to the building, perhaps to prevent a repeat of the scene on Martin Luther King Day, when a group of about 50 people, including some recently returned from first-hand witnessing in Iraq, had paraded around the grounds and a smaller group of about 10 had tried to enter the building for a dialogue. That day, police had seemed unprepared, and made no arrests.

Why was there such a display of force today? Were the police simply embarrassed by their lack of preparation last time out (only to be made even more embarrassed with today's show of firepower for the small vigil)? Or has the campaign to get SNC-Lavalin to divest itself of its bulletmaker or, better yet, transform itself into something socially useful, begun to have an effect inside corporate boardrooms? 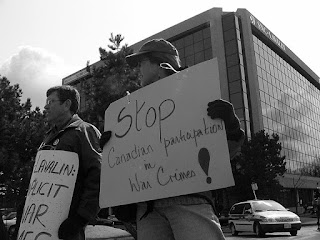 Bullet production certainly has been cause for a great deal of dialogue inside the building, according to employees who ventured out for lunch and discussed the issue with the demonstrators.

And if SNC-Lavalin was trying to deflect attention away from itself because of its unsavoury practices, this was certainly not the way to do it.The huge police presence also meant many passersby slowed down to see what was going on and, having found out, honked enthusiastically their support for our vigil.
While some employees refused to look at us, others nodded in silent support, and a few were vocal in their words of encouragement. Some said they were unaware there was to be a protest, so there was concern when police on horseback started circling the building this morning. Once that occurred, the company did much of the work for us, by explaining once again in an internal email that SNC's profiting from bullets was the cause of our demo.

Some employees stood out on the front porch for a short time while we called out to them to have a dialogue on divestment, but apparently a senior manager ordered them back inside. It is that kind of treatment--not even allowing employees the right on their break to speak with us--that has contributed to a certain amount of discomfort within the company.

Indeed, one employee told us of a personal decision to give notice in a few weeks time, declaring that the bullet contract was one more reason to leave the company, in addition to concerns about what the individual described as shoddy environmental practices by the firm in its engineering and mining projects and poor treatment of employees.

As we left the armed encampment that was SNC-Lavalin this afternoon, we vowed to return, to once again expose the lie that Canada is not involved in the crimes taking place in Iraq, and to challenge a complacent population which seems to have bought that lie in much the same way as many have swallowed the line that Paul Martin's announcement on star wars means Canada is not involved in space warfare (when in fact it is official Canadian government policy to view space as the fourth medium of warfare).

Stay tuned. Better yet, if you are one of those people who has enough money to have investments, make sure none of your money is going to SNC-Lavalin. If it is, divestment provides a perfect way to express your displeasure at their profiting from war crimes.

(report from Matthew Behrens of Homes not Bombs; photos by John Bonnar) 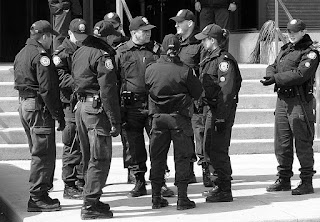 NOTE: This campaign proved successful. SNC-Lavalin was forced to divest itself of its bullet division.
Posted by TASC at 8:41 AM No comments: