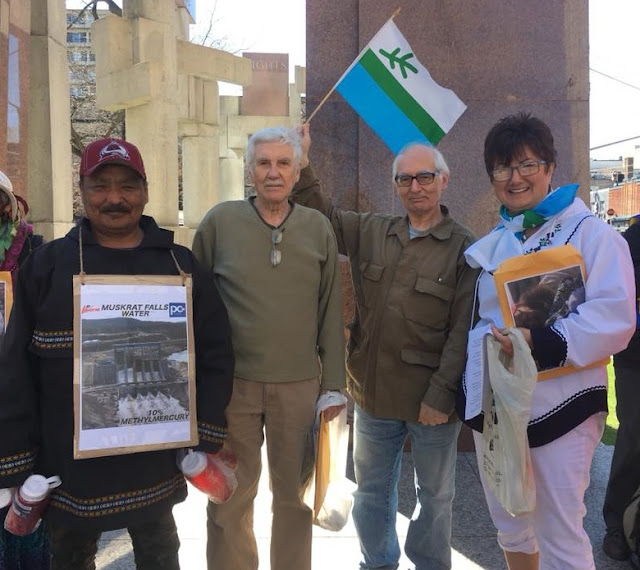 Labrador Land Protectors (from left) Angus Andersen, Jim Learning, Eldred Davis and Marjorie Flowers all traveled over 2,000 km from Labrador to share the voices and faces of those most at risk from the lethal Muskrat Falls megadam, which the Trudeau government backs with a $9.2 billion investment. The response of the Trudeau government was the same as it's been across the land responding to land and water protectors: 15 arrests, including Learning, Davis and Flowers.

Monday, May 7 was a powerful day on Parliament Hill (located on unceded, unsurrendered Algonquin territory), as well as across the country with six separate gatherings in Winnipeg, Mississauga, Halifax, St. John's, and Happy Valley-Goose Bay in support of the Labrador Land Protectors at Muskrat Falls.

At the bottom of this post are links so that you can watch the four compelling videos of the various stages of the Ottawa gathering. You will also see pictures from across the land.

It also includes links to media coverage, a new petition on methylmercury poisoning of the Inuit downstream of Muskrat Falls from Amnesty International, ideas on getting involved, and upcoming events in Toronto (where we will gather Thursday, May 24 at 1 pm at 250 Front Street West to bring the faces and words of those most at risk to the shareholders of Emera, Inc., one of the biggest Muskrat Falls dam profiteers) and Ottawa (Monday, May 28, time TBA, a gathering at the office of Catherine McKenna, Minister of Environment and Climate Change, calling her to account for her failure to uphold Canada's legally binding responsibilities under the Minamata Convention on Mercury).

In Ottawa, Labrador Land Protectors and their allies tried to enter the House of Commons to place on the desks of all 338 MPs the faces and words of those most at risk from the Muskrat Falls megadam in Labrador, which threatens Indigenous people and settlers alike with methylmercury poisoning and mass drowning via catastrophic dam break. Free, prior and informed consent was never sought by the provincial and federal governments, and certainly never received from all Indigenous people affected by this lethal project.

Their lives and their lands and waters, as well as all life forms in the area,  have been turned into a national sacrifice zone that the Trudeau government is backing to the tune of $9.2 billion. An act of impending cultural genocide is well under way.

The response of the Trudeau government to the May 7 gathering was what it has been from coast to coast to coast since they took office: to arrest Indigenous land and water protectors and non-Indigenous supporters. Fifteen people aged 28 to 92 were arrested, including three Indigenous land protectors: Marjorie Flowers, Jim Learning, and Eldred Davis, who had driven the long 2,000-km journey from Labrador to attend.

Also present on the Hill was Angus Andersen, an Inuk man from Nain, Labrador, who handed out bottles of "Muskrat Falls Methylmercury Water."

We still have much to do to stop the Muskrat Falls megadam before it goes online. But for now, we invite you to see the faces and hear the voices who came to Ottawa in these powerful videos, as well as the voices who spoke out from Winnipeg to Happy-Valley Goose Bay.

We look forward to you raising your voice with us as we continue our campaign to stop this dam from going online, an utterly predictable disaster which cannot be reversed.


OTTAWA VIDEOS
(thanks to Anne Dagenais Guertin of the International Civil Liberties Monitoring Group for your videography!)

The Day Begins at the Human Rights Monument
https://www.youtube.com/watch?v=OwbxgQ8t2wA

Once on the Hill, the Labrador Land Protectors speak truth to three Parliamentary Secretaries – from the ministries of Stolen Resources, Colonial Affairs, and Ocean Pollution. They then try to enter the House of Commons and are placed under arrest, with an Indigenous woman, Marjorie Flowers, the only one targeted for differential treatment: being painfully handcuffed.
https://www.youtube.com/watch?v=0GEeFeV5Kig

Following their release – all were banned from Parliament Hill for 90 days, even though the group rejected colonial jurisdiction, having sought and received the support of title holders from the Algonquins of Barriere Lake – they reflect on the day, and remind all that they never gave free, prior and informed consent for the Muskrat Falls megadam.
https://www.youtube.com/watch?v=7DLxslhcdso


PHOTOS FROM ALL THE DAY OF ACTION GATHERINGS

From across the land: http://homesnotbombs.blogspot.ca/2018/05/grade-10-mississauga-students-support.html


While this Amnesty International petition focuses on methylmercury, it is equally critical that we not lose sight of the other lethal threat at Muskrat Falls: the threat of catastrophic dam break because it is built on quick clay (soil that moves and liquefies under pressure).
https://e-activist.com/ea-action/action?ea.client.id=1770&ea.campaign.id=50190

On Thursday, May 24 from 1 to 2:30 pm, join us as we bring the faces and voices of those most at risk from the lethal Muskrat Falls megadam to the project's biggest beneficiaries, the shareholders of Emera, Inc.

Monday, May 28, Time TBA: Ottawa Vigil at Office of Catherine McKenna, Minister of Environment and Climate Change
May 28 will mark almost 14 months since Canada signed the Minamata Convention on Mercury, a legally binding treaty negotiated under the United Nations Environment Programme to reduce mercury emissions and to protect the environment and human health. McKenna says, "Our Government is unwavering in its commitment to safeguard the environment and the health of Canadians from the effects of mercury."

Yet the Convention is being violated at Muskrat Falls, where the Trudeau government's $9.2 billion investment in Muskrat Falls guarantees a massive spike in methylmercury poisoning. The Convention Canada signed on to is clear in recognizing  "the particular vulnerabilities of Arctic ecosystems and indigenous communities because of the biomagnification of mercury and contamination of traditional foods, and concerned about indigenous communities more generally with respect to the effects of mercury."

The Minamata Convention is a 21st century response to the catastrophic pollution in Minamata, Japan, where industrial releases of methyl mercury caused the epidemic known as the Minamata disease in the 1950s and onwards.

4. You can help contribute to our costs by writing cheques to Homes not Bombs at PO Box 2121, 57 Foster Street, Perth, ON K7H 1R0, or sending etransfers to tasc@web.ca