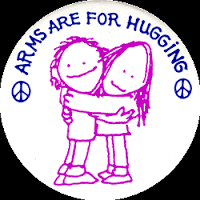 Homes not Bombs has received an interesting communique from a group calling itself The Spring Nuremberg Action Group 2 (SNAG2), which has anonymously pledged to nonviolently filter its members into the CANSEC weapons bazaar in Ottawa May 25-26. Once inside, they plan to hug merchants of death in an attempt to love them out of the bad place they must be in to sell such horrific weapons, and also to share copies of the Nuremberg Principles, among other international laws they say are violated by the CANSEC gathering.

"On May 25 and 26, we will be well-dressed and business-like, indistinguishable from the weapons merchants and the warriors of the Liberal Trudeau government who will be perusing the massive weapons on display and hob-nobbing with some of the world's worst human rights violators," says the communique. "With an ID pass that is a virtual replica of those being used for CANSEC2016, our entry should not be a problem. We will be absolutely peaceful, engaging in dialogue about the Nuremberg Principles, which prohibit wars of aggression. Nuremberg, among many other international laws, is daily violated by the countries visiting this weapons fair, as well as the weapons dealers themselves. By sharing with the CANSEC attendees the international laws that they are violating, we hope to engage in a dialogue about how we can transform our global war economy of $1.5 trillion annually into a caring economy in which we make sure all of our needs are met while caring for the planet."

SNAG2 members say they may also bring in the occasional banner, as well as recordings of the sounds of the victims of CANSEC products, from the crying of children and the wailing of mothers after their homes and schools have been bombed to the screams of those tortured in dungeons around the globe run by the majority  of countries represented at CANSEC.

They call the CANSEC gathering an illegal conspiracy that contravenes the Canadian (in)Justice Dept.'s Crimes Against Humanity and War Crimes Program, "A person is considered complicit if, while aware of the commission of war crimes or crimes against humanity, the person contributes directly or indirectly to their occurrence. Membership in an organization responsible for committing the atrocities can be sufficient to establish complicity if the organization in question is one with a single brutal purpose, e.g. a death squad." They note this applies to U.S., Israeli, Saudi, British, and other human rights violators who will be in attendance at CANSEC.

SNAG2 also notes CANSEC is an illegal gathering because "it is being held on traditional, unceded Algonquin territory, and it appears the war show organizers have not sought permission from the Algonquin nation for this exhibit.... This is a criminal gathering, a celebration of terrorism, and we plan to be a life-affirming antidote to this disgusting display of the tools of mass murder," the communique notes. "So arms dealers and buyers should not be surprised when they turn around to see someone who looks just like them opening a suitcase with a beautiful banner celebrating peace and justice. If they're not careful, they might even get a hug. Sometimes weapons dealers just need to be loved out of the very bad place that they find themselves in to sell such horrifying machinery of murder."

While Homes not Bombs is not familiar with who may be members of the nonviolent SNAG2, the communique states: "We are the children of The Spring Nuremberg Action Group, which in the spring of 2003 shut down Canadian Forces Base Downsview because the Canadian military, while participating in the invasion and occupation of Iraq, refused to allow copies of the Nuremberg Principles onto their base." SNAG2 notes that in 2011, an attempt to present Nuremberg principles at the CANSEC weapons fair, then held at Lansdowne Park, met with 12 foot high fences and heavy security.

The SNAG2 communique concludes: "There may be massive delays as a result of our appearance at CANSEC, because everyone's ID will no doubt have to be double and triple checked, and there are so many ways of getting in that they may have to erect a massive fence around the perimeter. But these are minor inconveniences compared to the real, terminal damage done by CANSEC and its buyers. We believe our unarmed agents of love and compassion being onsite over those two days might change some hearts, minds, and spirits."

While Homes not Bombs is not sure who SNAG2 might be, they wish them well in their nonviolent efforts.