Close the CANSEC Killer Weapons Bazaar: In the Name of the Children

The Faces of War Will Return to the CANSEC entrance on May 25, 2016

Canada's largest annual weapons bazaar opens on May 25 in Ottawa.

The world's worst human rights violators, including the U.S., U.K., and the beheading regime of Saudi Arabia, will be there.
Will you?

In addition to welcoming the world's leading weapons manufacturers, CANSEC will also host companies that profit from border controls, militarization of police forces, refugee interdiction, the prison-industrial complex, and mass surveillance. It's a toxic gathering celebrating repression, racism, and war.

Join us for a day of nonviolent action to close the most violent annual gathering in Canada.
Wednesday, May 25, 7:30 am to 1 pm, EY Centre, 4899 Uplands Drive, Ottawa

Starting at 5 pm at York and Sussex (Ottawa, Byward Market area) on Tuesday, May 24, General Chaos, the much decorated man of colonial adventure, imperial hubris, and high-priced weapons industry consultation, will lead a walk to welcome delegates to CANSEC16 (aka TerrorismFest16), one of the largest weapons bazaars in North America, and host to an international array of guests from Saudi Arabia, Israel, United Arab Emirates, the UK, the USA, and multitudes of other human rights violating nations. Won't you join the General as he welcomes his brother war-criminals-in-arms? Being a Canadian, he may allow a few speeches about human rights and ending violence, but he knows the score. As a Trudeau appointee to a new panel advising the government on how best to smooth over the unsavoury elements of sales like the $15 billion blockbuster to the world's leading beheading regime, Saudi Arabia, General Chaos "gets" that he must spout the usual euphemisms about human rights while supplying those who would violate them.

So stretch your legs, bring your noisemakers and musical instruments, and "welcome" the weapons buyers who will swarm over the CANSEC16 site at the EY Centre the following day. And if you can join us for some of the May 25 protest, running 7:30 am to 1 pm, please let us know at tasc@web.ca or (613) 267-3998. 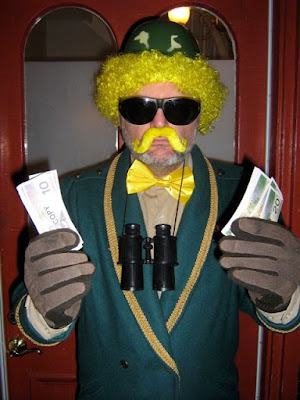 General Chaos, who will welcome his war criminal friends on May 24 from 5-7 pm.

"We are determined to revitalize Canada’s role in peace-keeping." Justin Trudeau at the UN, March 16, 2016

Despite a change in government, the Canadian warfare state continues undisturbed, and even better served by the Liberals, who have signed off on a $15 billion sale of killer armoured brigade vehicles to the leading beheading regime of the world, Saudi Arabia (which is also committing horrific war crimes against the people of Yemen). Meantime, the Canadian weapons industry continues to supply the world's leading sponsor of state terrorism, the U.S., to the tune of billions annually. Justin Trudeau and Stéphane Dion have sent a clear message to the death merchants of Canada: carry on as you did under Harper, and don't mind our occasional human rights rhetoric. It won't apply to Canadian weapons dealers whose bottom line relies on the overseas market of supplying the tools of torture and terrorism to dictatorships and juntas, as well as those "democracies" that support them.

And so it falls once again to people like us to say NO to the weapons trade. That NO must NOT be a call for "export controls" or "arms control" or "weapons limitations," but a clear and precise demand for the only thing that makes sense: disarmament. One way to stop mass murder, carpet bombing, and other atrocities is for Canada to stop producing the tools of terrorism. In addition, anyone concerned with climate change recognizes that one of the world's worst emissions producers are global military forces, which remain exempt from climate change agreements.

We will be organizing transportation to and from the site, so consider how long you can stay (with that in mind, pack a lunch, bring snacks and water)

We will be hanging lots of banners on the fences. Consider making some artwork that is representative of resistance to war.

We will read aloud the reports of human rights groups, the testimonies of the disappeared and detained, the stories of survivors who have lived in terror under the bombs that come from Canada. We will nonviolently, lovingly lay siege to CANSEC16 by telling our own stories and refusing to buy the myths of militarism and CANSEC’s glorification of terrorism and barbaric cultural practices. We will build a large graveyard to commemorate victims of CANSEC’s exhibitors, guests, and hosts. We will sing. We will speak our truth. At the same time, we will refuse to engage in any acts of violence, whether physical or verbal, and will not seek to humiliate CANSEC16 attendees or those hired hands patrolling the vicinity.

1. Coming from out of town? Let us know if you need billeting.

2. Can you provide transportation to help people get to the EY Centre (next to Ottawa airport)? Can you put up out-of-town visitors in your Ottawa home? Can you help provide food and water on the day of the event? Contact tasc@web.ca or call 613-267-3998

4. Can’t make it? Send us a poem, an essay, something that you want shared at our day-long speakers’ platform. Let us know if you would be able to organize a vigil in your community art a weapons manufacturer, a federal office, etc.


Sponsored by: Homes not Bombs, Nowar/Paix, Coalition to Oppose the Arms Trade, Raging Grannies, and Country Music Fans Against War and Repression.
Posted by TASC at 6:46 PM