Just Say “No” to Canada's Expanding War in Iraq and Syria

Just Say “No” to Canada's Expanding War in Iraq and Syria

Call for an End to Conservatives’ Racism and Fear-Mongering 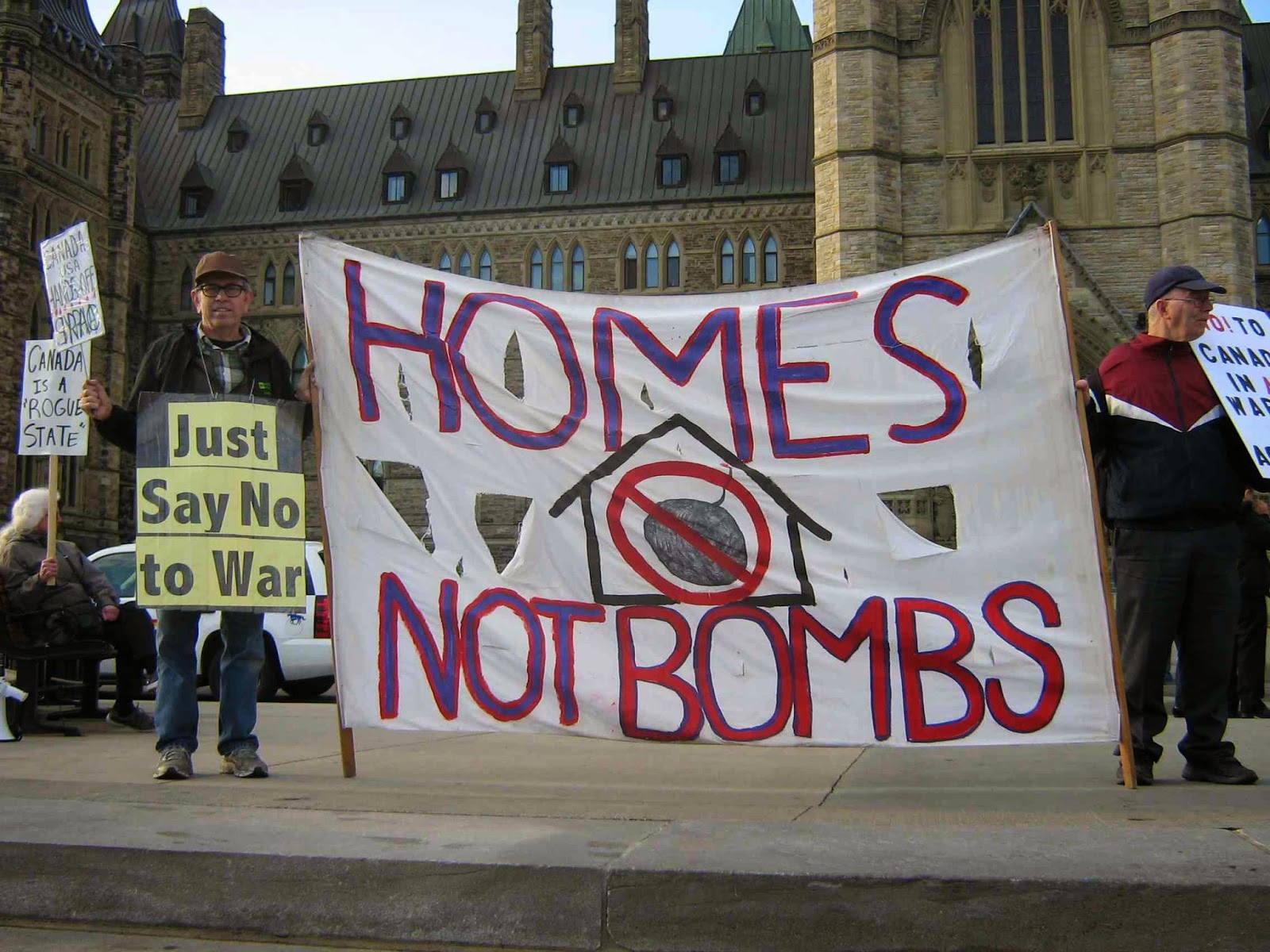 Join us for a nonviolent noon-hour vigil to say:

a.    NO to expanding the Harper government's war

b.    NO to the racist, hateful atmosphere the Harper government has been stoking at home by attacking Muslims and First Nations, among others.

c.     NO to the repressive new Bill C-51, which criminalizes large groups of people across the country, authorizes torture, preventive detention, and other repressive measures.

While Stephen Harper is pushing through remarkably repressive legislation, C-51, by fearmongering and stoking the flames of racism, he is also planning to extend and expand Canada's military involvement in Iraq and, possibly, Syria.

The last thing the region needs is more weapons, bombings, and violence. It was the massive influx of American, Canadian, and UK weaponry during the illegal occupation of Iraq that provided the weaponry for ISIS in the first place. It was the torture centres run by occupation forces that gave birth to much of the leadership of ISIS. It has been almost three decades of near constant warfare against the Iraqi people (sanctions that killed 1.5 million people, U.S.-led wars that have killed equal if not greater numbers) that have produced the current impasse.

Harper's proposal will only further inflame the violence in the region when what is truly needed is massive support for the millions of refugees the conflicts have produced (9 million Syrian refugees alone), measures to strengthen nonviolent resistance both to ISIS and the Assad regime, and a pullout of interfering "western" forces that are responsible for millions of lives lost over the past 25 years in the region.

Canada and Syria: Partners in Torture, and Now in War?

Any attacks in Syria would have to be coordinated with and approved by the vicious Assad regime which, until recently, the Harper government was condemning as oppressive, with former Foreign Affairs Minister John Baird  referring to "The Assad regime’s campaign of terror" and saying Assad must go. (Canada has nonetheless been allied with the brutal torture regime in Syria, which acted as a proxy torturer for Canadian intelligence agencies, as confirmed by two judicial inquiries).

Meanwhile, the Harper government continues to support the leading beheading regime on the planet, Saudi Arabia (a strong ISIS supporter), with a $15 billion military contract.

Hundreds of millions of dollars have been spent on the war already, and still we do not know exact figures, as homeless people freeze to death on Canadian streets, over 100 First Nations communities remain on boil water alerts, and veterans of past wars continue struggling for benefits they deserve for catastrophic physical and mental health injuries.

Women-led initiatives have in some instances nonviolently resisted ISIS and Assad, nonviolent voices are calling out for support (see also “What would Jesus Do”), and billions in bombs will only damage their on-the-ground efforts.

Needless to say, the bombing campaign has not, nor will it, stop ISIS. As The Guardian reported in January, 2015, "the absence of a political process...is driving Sunni communities to consider allying with Isis...especially around Baghdad. Iraq's vice-president for reconciliation, Iyad Allawi, said lack of a political process between the dominant Shias and disenfranchised Sunnis was a 'grave mistake' that mean air attacks achieve little." Indeed, the massive sectarian violence around Baghdad is forcing some to consider joining Isis. Allawi says the last thing the region needs is more weapons; instead, he says, jobs, a stable economy, and ensuring equal rights and protections would go a long way to stabilization.

Indeed, over the past 15 years, some 5 trillion dollars have been wasted globally on illegal wars, endless terrorist drone strikes authorized by Obama, and domestic repression, making the world an even more dangerous place. Dropping more bombs and hiking up racist rhetoric only threatens to add to the huge list of human rights violations and misery oin a mass scale.

The Harper rationale of "fighting them overseas so we don’t have to fight them at home" is fallacious. If the Harper government wants to end terrorist plots, it needs to stop organizing them (all current plots in the courts are in large measure instigated or managed by RCMP/ CSIS/ FBI informants). The Harper government refuses to deny the involvement of an agent working for Canada who has recruited and facilitated the travel of a dozen young people to join ISIS.

Meanwhile, Harper is ramming through the dangerous C-51, which authorizes torture, mass surveillance, racist profiling, and other forms of repression. He and his caucus members have fanned the flames of hatred by attacking Muslims, with one Conservative MP telling Muslim women to  “stay the hell where they came from.”

Homes not Bombs welcomes you to join us for this noon-hour vigil to call for an end to Canadian involvement in the war and to stop aiding and abetting violence abroad and at home. Can’t be there? Try and organize a witness at your local MP’s office, and definitely call them and email them.

Meantime, as we know, the Harper government has ordered all federal departments to monitor EVERY SINGLE demonstration in Canada, no matter how small. That shows how afraid they are of democracy. So even if you are one person with a sign, that WILL be noticed. Two people doubles the effect, and so on.

Other Things you can do and Upcoming Events You Can Join

2.   2.  Email the Prime Minister to let him know you oppose war under all circumstances, racism, and the repressive new C-51. The Harper government may act like it doesn’t care what you think, but it outspends all previous governments in monitoring protests, emails, letters, media, etc. So every email counts! You can email Harper from this weblink: http://pm.gc.ca/eng/contactpm   OR write directly to stephen.harper@parl.gc.ca, and cc opposition leaders Mulcair, Trudeau, and May at thomas.mulcair@parl.gc.ca, justin.trudeau@parl.gc.ca , and  elizabeth.may@parl.gc.ca

3.   3.  Join a Chain Fast to End Islamophobia  and Racism (mid April to mid June): For details write to  tasc@web.ca

4.    4.  On Wednesday, May 27, in Ottawa, Join Ten Hours Against Terrorism: A Day-long vigil at Canada’s largest annual weapons fair, CANSEC15 (aka Terrorfest15), which will be hosting delegations from some of the world’s leading torture states. We will be encouraging demos at weapons manufacturers across Canada on that day as well.

Sponsored by Homes not Bombs: Because Canada should build homes, not blow them up

“There is nothing as vile as the arrogance of the military mind. Of all the plagues with which the world is cursed, of every ill, militarism is the worst: the assumption that war is the answer to human problems.” – Rabbi Abraham Heschel

“Our strategy should be not only to confront empire, but to lay siege to it. To deprive it of oxygen. To shame it. To mock it. With our art, our music, our literature, our stubbornness, our joy, our brilliance, our sheer relentlessness – and our ability to tell our own stories. Stories that are different from the ones we’re being brainwashed to believe.” – Arundhati Roy
Posted by TASC at 8:30 AM