Thursday's release of preliminary findings by the United Nations Special Rapporteur on human rights and hazardous substances and wastes paints a damning picture of environmental racism and, at Muskrat Falls, a very real threat of methylmercury poisoning from a project that failed to receive free, prior and informed consent of Indigenous people. Front-line land defenders from Labrador are currently travelling over 3000 km to get to Ottawa for the events below, as is a delegation of Indigenous women from hydro-impacted communities in Manitoba.

Why: As 1,100 delegates to a large dams conference gather in Ottawa, Indigenous people adversely impacted by large dams, along with supporters, will spend the day involved in peaceful protests against the dams while presenting Catherine McKenna with a petition signed by over 15,000 people


Ottawa, ON (Unceded, Unsurrendered Algonquin Territory) – Representatives of a number of Indigenous communities adversely impacted by large hydro dams and their supporters will converge on Ottawa June 10 to hold a 9 am press conference in Room 135-B (West Block) and a series of peaceful protests to call on all federal parties to address their concerns about communities seriously damaged by megaprojects that have never received their free, prior and informed consent.

Following the press conference, the land and water defenders will be joined by supporters outside the massive gathering of the International Commission on Large Dams (ICOLD), whose 1,100 members are holding a week-long conference at the Shaw Centre (55 Colonel By Drive). There, they will try and share their experiences of large dams’ negative impacts on their communities with conference attendees, starting at 10 am.

The gathering follows on the release of preliminary findings from the United Nations Special Rapporteur on human rights and hazardous substances and wastes yesterday in Ottawa, including his recommendation that the federal government "use its leverage as the largest investor in the [Muskrat Falls] project to review whether UNDRIP compatible procedures were followed for all affected indigenous peoples,  and to prevent the release of methyl mercury.”

Amy Norman, who for almost three years faced criminal and civil charges for peacefully protesting the Muskrat Falls megadam in Labrador (which is backed by $9.2 billion in federal loan guarantees), will then lead a delegation to Parliament Hill during the noon hour to try and present a petition with 15,000 signatures calling on Environment Minister Catherine McKenna to take immediate measures to stop the impending methylmercury poisoning of the Inuit and Innu peoples’ traditional food web. A similar presentation will take place in St. John's, Newfoundland on June 10 as well.

“So many people downstream of Muskrat Falls rely on country food for their diet, and with Harvard University clearly showing that this food web will be poisoned with the neurotoxin methylmercury, people are incredibly anxious and afraid for their future and that of their children and grandchildren,” says Norman, who has travelled over 3,000 km to Ottawa.

Among those who have also traveled significant distances are a delegation from Northern Manitoba as part of the Wa Ni Ska Tan Alliance of Hydro-Impacted Communities. They want to draw attention to the devastating socio-economic, cultural and environmental impacts associated with mega-hydro and to address delegates at the ICOLD gathering. Dr. Ramona Neckoway, Chair of Aboriginal and Northern Studies at University College of the North and member of Nisichawayasihk Cree Nation (Nelson House) states that “the cumulative and extensive impacts of mega-hydro are poorly understood and are ignored by industry, governments and regulators. In northern Manitoba, many of us were born into damaged landscapes and fresh water has been sacrificed for mega-hydro. I am here to stand in solidarity with other hydro-affected communities who share similar experiences and concerns” she explains. She and other northern Manitoba Cree recently addressed the United Nations about these concerns.

"We're fed up with what's going on, and how we're left out and how things are just fast-tracked in regards to our lands,” explains Carol Kobliski, also of Nisichawayasihk Cree Nation. “There's not proper consultation, and these dams are just coming up all over the place."

Pimicikamak Okimawin elder Rita Monias, who was arrested in a peaceful protest last fall on Parliament Hill, will be part of that delegation as well.

“ “We have seen major displacement, a loss of cultural knowledge, reduced access to traditional foods and medicines and far fewer opportunities to take part in our traditional economy, destruction of our burial grounds and cultural sites, the fear of eating our traditional foods because of methylmercury poisoning, injury and death due to hazardous navigation on the waters, and major changes and reductions in the wildlife whose patterns have been disrupted by the dams,” says Monias. “We cannot allow any more environmental devastation on our Mother Earth. We have to protect it.”

Notably, this week’s report of the Inquiry on Missing and Murdered Indigenous Women and Girls called for a public inquiry into another of big hydro’s ill effects: sexual assault and racism by residents of man camps at remote Manitoba facilities like the Keeyask dam.

Meanwhile, Meg Sheehan, traveling to Ottawa from New Hampshire, says she has a message for the Canadian government:  “We don’t want your dirty Canadian hydropower in the U.S. It is the equivalent of blood diamonds from Africa. There are unacceptable impacts on local communities and Indigenous rights. In the U.S. we are cutting off the markets for Canadian hydropower by stopping the seven transmission corridors planned through Maine, New Hampshire, Vermont and New York.” 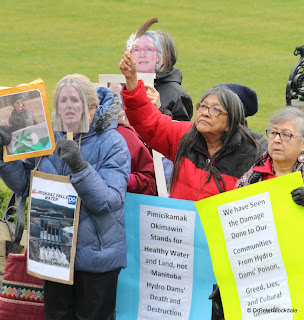