A Decade Gone: A Statement from the Hassan Diab Support Community

This case is part of a decades long pattern in which persons who fit a profile – Middle East heritage, Muslim faith, or perceived to be Muslim – are presumed guilty of offences despite the lack of any concrete evidence. Individuals like Dr. Diab whose physical description, finger and palm prints, and handwriting do not match the original suspect’s are nonetheless presumed to be perpetrators simply because of who they are, where they are from or what they believe.

A Decade Gone: A Statement from the Hassan Diab Support Community, January 17, 2018

Ten years is a long time. Recall everything you have done over the past decade, think of the challenges you have faced, the joys you have cherished, the memories you’ve made, the things you forgot about until someone else reminded you, and you can begin to appreciate just how long a decade can be. 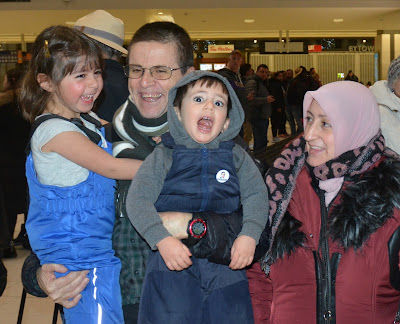 Hassan Diab is finally home, but the struggle for justice, including a public inquiry into his case and major changes to the Extradition Act – what he refers to as "that lousy Extradition Act" – goes on to prevent others from suffering the decade-long nightmare of Dr. Diab and his family.

Now imagine how long this decade has been for Dr. Hassan Diab.  Like too many of his 21st century contemporaries, he has been wrongly labeled a terrorist because of the country where he was born and the religion he was perceived to practice. Like a number of them, he was wrongfully accused of a crime he did not commit, jailed in solitary confinement in Canada and overseas for years on end, and at the same time confronted with a court room charade so riddled with secrecy and lack of due process, that it placed him at real risk of  spending the rest of his life in prison..

For years, Dr. Diab was subject to draconian bail conditions in Canada, strapped to an electronic monitoring device tracking his every movement and for which he had to pay $2,000 a month, or be sent back to jail.  He was prevented from pursuing the profession he loved, sociology. For ten years he tried to sleep at night, not knowing whether the next day he would be taken from the embrace of his loving family and jailed for the rest of his life. Always, he maintained and affirmed his innocence, and condemned the crime for which he was accused.

Our friend Hassan Diab has lived this nightmare since 2008. It came from the actions of misguided Canadian government officials at the Department of Justice and was wholly preventable;  so many red flags were raised along the way it is  astounding and shameful that no one in government ever sought to stop the injustice being done to Hassan.

This case is part of a decades long pattern in which persons who fit a profile – Middle East heritage, Muslim faith, or perceived to be Muslim – are presumed guilty of offences despite the lack of any concrete evidence. Individuals like Dr. Diab whose physical description, finger and palm prints, and handwriting do not match the original suspect’s are nonetheless presumed to be perpetrators simply because of who they are, where they are from or what they believe.

As members of the Dr. Hassan Diab support community, we have been privileged to play a modest role in this decade-long journey of an innocent man towards justice and freedom. We have provided bail money, volunteered to be sureties, written to government officials, signed petitions, frozen in countless demonstrations, sat through months of judicial hearings, and visited him in prison, all in the name of seeking a due process that was never granted to Dr. Diab under Canada’s notoriously unfair Extradition Act.

Whether we knew him before this began, or came to know him as a result of this long decade, we can attest to the values of friendship, generosity, compassion, and kindness that mark Dr. Diab and his remarkable family. With Dr. Diab, with Rania, and with their young children, we have gone on hikes, have attended theatre shows, played many a game of chess, have gone on bike rides, watched them play with their children, have shared meals from his remarkable culinary hand, and have engaged in deep philosophical and historical discussions. Throughout the disappointments and sorrows, Hassan and Rania have endured with grace. We have learned so much from them; it has been a privilege. We are very thankful to the wonderful, outpouring of support Hassan and his family have received from countless individuals and organization across Canada, and the tireless work of his lawyers in Canada and France.

While we came together to support and fight for the freedom of a wrongfully accused individual, this became so much more personal for many of us who came to respect and love Dr. Diab, Rania, and their children. For many of us, this was more than a cause: it became what you do for a friend or loved one facing a long, protracted death sentence when the antidote is readily available and accessible. If only officials at the Department of Justice took the time to see the human behind the racist profile, and look at facts,  then perhaps such cruel, heartless injustices would not be so easily committed.

While we are indeed grateful to see action on the part of some Canadian officials, we do have to ask: why did it take so long? Why did we have to fight so long and so hard to get this onto your agenda? Why did Dr. Diab and his family face years of the same indifference and lack of action that unfortunately accompanies the cases of far too many Canadians detained abroad?

For now, we look forward to Hassan and Rania and their kids getting to spend time together. And we look forward to continuing our friendship with this remarkable family. They will need time away from the public spotlight to decompress, to simply be with one another outside the context of the fear, the stress, the tears, and the feeling that this Kafkaesque nightmare would never end, a psychological and often  physical prison imposed by the Canadian government’s failure to uphold their most basic human rights.

In the meantime, it is critical to remember that this is by no means over. You do not rob someone of their life for ten years and pretend that nothing happened or that this is a happy ending because it appears to be over.

Towards that end, we in the Justice for Hassan Diab support community are calling on the Canadian government to take immediate action on a number of fronts to not only help Dr. Diab recover, but also to ensure that the inevitable next extradition injustice does not occur.

1.     The Extradition Act under which this travesty occurred must be subject to a thorough, public, Parliamentary review, and major changes must be made to ensure that foreign governments do not collude with the Canadian government to exploit the law’s inherent weaknesses in order to deprive someone of their basic rights, or to carry on a political persecution by proxy as occurred in this case.  Sadly, under current extradition law anyone, including citizens, who lives in this country could wake up tomorrow and find themselves in Dr. Diab’s shoes.  This must end.

2.     Prime Minister Trudeau said in response to this case this it is cause for reflection.  We believe it deserves more than that. A full, public inquiry into the role of the Canadian government is urgently needed– especially the part played by officials in the Justice Department  in recklessly pursuing this case on behalf of another government when it was abundantly clear from the beginning that there was no substance to the allegations and by their requesting  additional evidence against Dr. Diab when it was absolutely clear that the case was on the verge of collapse. The Canadian government must be transparent in explaining how Canada’s extradition law paved the way for potential wrongful conviction and life imprisonment abroad. Most importantly, individuals must be held accountable.

In summation, a thorough public review and major changes to the Extradition Act to ensure that the perceived right of another government to pluck someone out of Canada based on scanty, secret, or contrived evidence does not trump an individual’s rights under Canadian and international law. And a public inquiry into the role of Canadian officials – especially at the Department of Justice – in recklessly pursuing this case, with recommendations to ensure such cases do not happen again, is essential and urgent
Posted by TASC at 8:52 AM No comments: