Mohawk Chief: “All I Can Do is Pray Things Change for My People”

An edited version of this story appears in NOW Magazine's Nov. 12 issue
By Matthew Behrens
Rideau Hall’s glorious fall foliage produced the perfect backdrop for a series of memorable photo-ops during the Trudeau government’s swearing-in ceremony, from the most diverse cabinet in Canadian history to the large crowds who waited patiently for selfies with the photogenic PM.

Yet one of the most posted photos of the day did not come from the colourful festivities marking what seemed a refreshing changeover to a government marked by openness and transparency. Rather, it was an old handout of a camouflaged Sikh man packing serious heat in Afghanistan, Harjit Sajjan, who had just been named Canada’s new Minister of National Defence. 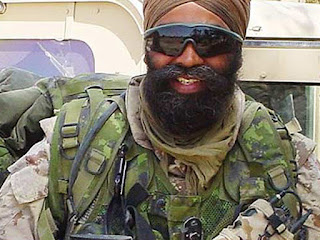 While the social media universe immediately featured a disturbing round of racist comments – including the conclusion that the bearded man could not be trusted because he must be a Muslim – most press coverage was far more salutary, from Foreign Policy’s gushing “Canada’s New Defense Minister Made His Own Gas Mask to Work With His Beard” to the National Observer’s “You don't know how badass Trudeau’s Defence Minister really is”.

An Intelligence Asset Complicit in Torture?
Sajjan, in stark contrast to such milquetoast predecessors as Jason Kenney and Peter McKay, was hailed as “some kind of next-level Spy vs Spy war hero” who’d done three tours in Afghanistan and was praised by his superiors as “the best single Canadian intelligence asset in [the Afghan war] theater.”

Despite all the puff pieces, Sajjan’s presence in his new job may open a can of worms that former PM Harper thought was pretty much sealed shut when he prorogued Parliament in 2009 to avoid stinging questions about Canadian complicity in the torture of Afghan detainees. Sajjan’s tours as a key Canadian asset and liaison with torture-tainted Afghan authorities dovetailed with an era when significant human rights concerns had been quietly raised by Canada’s foreign affairs representatives, including a 2005 Canadian report that noted Afghanistan’s “military, intelligence and police forces have been involved in arbitrary arrests, kidnapping, extortion, torture and extrajudicial killing of criminal suspects.”

In 2006, as Harper’s Conservatives took over direction of a war begun by the Liberals, Graeme Smith’s remarkable Globe and Mail investigative reporting and the courage of Canadian whistleblower diplomat Richard Colvin brought to light a side of the Afghanistan occupation that most Canadians could not square with their traditional perceptions of the military. Terms like “war crimes” were openly used to describe Canadian transfers of detainees to the torture-stained Afghan National Directorate of Security (NDS), and the Harper government faced potential contempt of Parliament proceedings over its refusal to release thousands of documents related to the scandal. 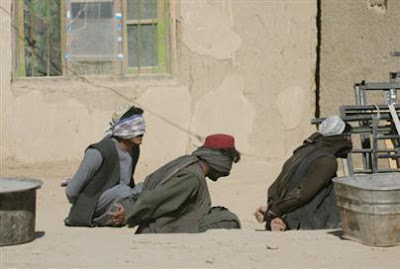 Colvin, who had served 17 months on the ground in Afghanistan, testified seven years ago this month that Afghans transferred from Canadian Forces to the NDS commonly faced “beating, whipping with power cables, and the use of electricity. Also common was sleep deprivation, use of temperature extremes, use of knives and open flames, and sexual abuse—that is, rape. Torture might be limited to the first days or it could go on for months. According to our information, the likelihood is that all the Afghans we handed over were tortured. For interrogators in Kandahar, it was standard operating procedure.”

"We handed over for torture a lot of innocent people"
Colvin pointed out that many detainees had nothing to do with the Taliban: “many were just local people: farmers, truck drivers, tailors, peasants, random human beings in the wrong place at the wrong time, young men in their fields and villages who were completely innocent but were nevertheless rounded up. In other words, we detained and handed over for severe torture a lot of innocent people.”

Colvin’s words were echoed by Canadian translator Ahmadshah Malgarai, a cultural and language advisor who, with secret clearance and commendations to his name, bravely told the Special Committee on the Canadian Mission in Afghanistan in April, 2010: “There was no one in the Canadian military with a uniform who was involved in any way, at any level, with the detainee transfers who did not know what was going on and what the NDS does to their detainees.”

While ongoing inquiries into the detainee scandal and the role of key Canadian decision makers were effectively shut down with the 2011 election of a Harper majority, the issue was raised again last week when the Military Police Complaints Commission announced it would investigate a new case in which Canadian soldiers allegedly abused and “terrorized” Afghan detainees at their Kandahar base. This inquiry follows on the little-publicized release of a new report authored by researcher Omar Sabry for the Rideau Institute and Canadian Centre for Policy Alternatives, which called for a “transparent and impartial judicial Commission of Inquiry into the actions of Canadian officials, including Ministers of the Crown, relating to Afghan detainees.”

Strong Need for Public Inquiry
Peggy Mason, a former Canadian Disarmament Ambassador to the UN and now head of the Rideau Institute, feels strongly that the transfer to torture issue is “unfinished business of the most serious kind – accountability of Canadian officials for alleged serious breaches of international and national law – the only appropriate remedy for which is a public inquiry.  What better way is there for this government to demonstrate its commitment to transparency and accountability than to call such an inquiry?”

But considering whether to hold such an inquiry is a decision from which Sajjan may have to recuse himself. Indeed, Sajjan could very well be compelled to answer some very difficult questions. As a high-level intelligence officer who appears to have taken an active role in combat operations, it seems implausible that Sajjan was not familiar with the torture rampant throughout Afghan detention system. Indeed, as Canadian Press reported last week, in 2006, Sajjan became the Canadian “intelligence liaison” to Kandahar governor Asadullah Khalid. According to Colvin’s Parliamentary testimony, Khalid “was known to us very early on, in May and June 2006, as an unusually bad actor on human rights issues. He was known to have had a dungeon in Ghazni, his previous province, where he used to detain people for money, and some of them disappeared. He was known to be running a narcotics operation. He had a criminal gang. He had people killed who got in his way. And then in Kandahar we found out that he had indeed set up a similar dungeon under his guest house. He acknowledged this. When asked, he had sort of justifications for it, but he was known to personally torture people in that dungeon.” (Khalid went on to become Afghanistan’s national intelligence chief).

Sajjan is also credited with the intelligence gathered for operations that led to the “kill or capture” of some 1,500 alleged Taliban members, a military claim that must be measured against the commonplace reference to any detainees as potential Taliban, as opposed to the broader categories of detainees translator Malgarai referenced in his testimony: “They went from 10 years old to 90 years old. With all due respect, I would ask retired General Hillier to tell me and explain to me how a 90-year-old man.... He was a 90-year-old man. He couldn't even walk without help. His hands were tied. His foot was shackled. He was blindfolded. Sometimes, when he couldn't walk fast enough, they pushed him. He fell many times, and he had injuries on his body. Could he please explain to me how this 90-year-old man, who couldn't even walk, who needed help when you tried to pick him up, could be a fighter?”

Big Questions
When NOW attempted to reach Sajjan for comment, DND media relations explained that he was being briefed on files and was very busy. When informed that the questions for Minister Sajjan did not involve new files but, rather, spoke to his own experience in Afghanistan, the media office requested a set of emailed questions. At press time, NOW still had not heard responses to a number of queries arising from a reasonable set of assumptions about his role on the ground and connections to key players. Among them: given the widespread and well-known use of torture by the NDS in Afghanistan by the time of Major Sajjan's first tour of duty in 2006, did he undertake precautionary measures to ensure that he was not passing on to his superiors information gleaned from torture (especially given his liaison role with Governor Khalid); alternatively, was such information caveated to the effect that its source may have been the fruits of torture?

In addition, as someone identified as Canada's top intelligence asset in Afghanistan, was Minister Sajjan aware of the transfers of detainees to the NDS and the documentation of torture then publicly available? If so, how did this colour his relationship with Khalid and the NDS? Equally compelling, in the small, circular world of intelligence operations, was information gleaned from NDS torture of detainees used in the Canadian round-up individuals who, upon detention, were transferred to the hands of NDS torturers? Ultimately, given his likely awareness of torture in Afghanistan, did Sajjan refuse to take part in any operational activity that may have led to the transfer of detainees to torture?

When the Harper government closed the case in 2011, Liberal MP Stéphane Dion (now Trudeau’s Foreign Affairs Minister) told the CBC “the likelihood is very high” that Afghan detainees were abused while in the custody, adding, "I don't think Canadians will accept that it's over.”

With Liberal promises of transparency and accountability, one of the most celebrated of Trudeau’s ministerial announcements may soon be facing a real test of public accountability.
Posted by TASC at 6:39 PM No comments: