Originally printed: March 24, 2003 Toronto--It really doesn't take that much to interfere with business as usual when war crimes are being committed.

The Canadian Military's Central Canada Command HQ was on full lockdown Monday, March 24 because of a major snag, courtesy of the Spring Nuremberg Action Group (SNAG). About 30 people from Homes not Bombs, Toronto Catholic Worker Community and other groups (minus the two painfully obvious undercover officers who attended our planning meeting-sorry guys, didn't quite work!) converged at the site of Canadian Forces Base Downsview around 12 noon. There they were met by scores of police fanned out across the base's main entrance, with police planted on the building's rooftop and across the front lawn in an apparent move to protect two tanks stationed in front of the military facility near Sheppard and Allen. 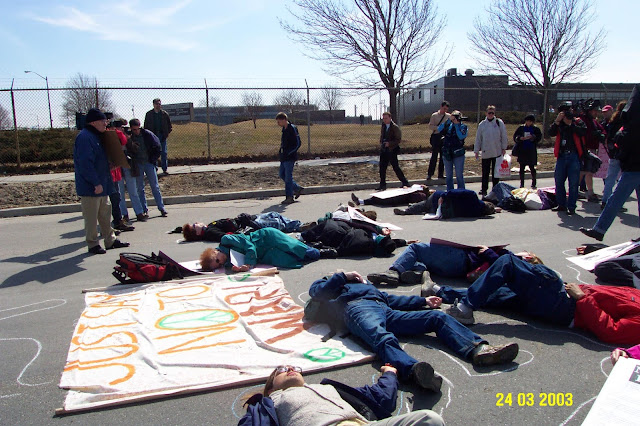 By day's end, the Canadian Forces felt so threatened by an attempt to hold them accountable to the laws of the international community that 10 people had been arrested, charged criminally with obstruction of police, and ordered not to be within 250 metres of any Canadian military facility. 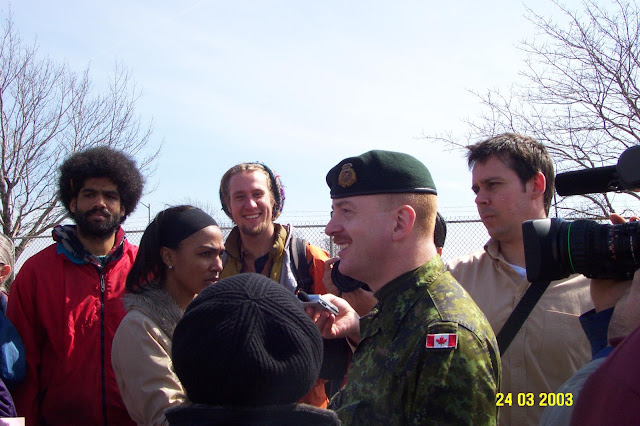 The demonstration was an attempt to enter the facility with an urgent plea: that members of the Canadian Forces, to avoid being complicit with ongoing war crimes, had to immediately return from the Persian Gulf, and that any member of the Forces not there had to withdraw from any alliance or organization currently involved in the commission of war crimes against the people of Iraq, else they could face criminal charges before a war crimes tribunal.

This was not based on some pie-in-the-sky lefty fantasy; it was based clearly on the rights and obligations of ALL individuals, civilian or military, under the Nuremberg Principles and the Canadian War Crimes Act. Indeed, the Canadian Government's own explanation of war crimes complicity is brutally clear.

According to the Canadian (in)Justice Dept.'s Crimes Against Humanity and War Crimes Program, "A person is considered complicit if, while aware of the commission of war crimes or crimes against humanity, the person contributes directly or indirectly to their occurrence. Membership in an organization responsible for committing the atrocities can be sufficient to establish complicity if the organization in question is one with a single brutal purpose, e.g. a death squad." 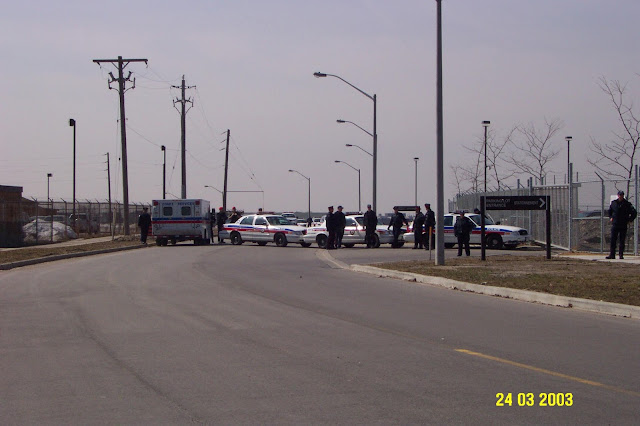 Indeed, the massed death squad currently invading and bombing Iraq is clearly involved in such crimes, and Canadians are participating in numerous ways: dozens of troops are "embedded" with U.S. and U.K. forces on the ground; dozens more remain at Central Command HQ in Doha, Qatar, where until very recently they were intimately involved in direct war planning; every time a cruise missile is launched from a U.S. warship, it is under the "protection" of three Canadian naval vessels with over 900 crew members aboard; Canadians are likely aboard the NATO equipment being used in the war, including the AWACS aerial command and control platforms from which many bombing runs (read acts of mass destruction) are coordinated; and money appears to have been set aside for sending CF-18 bombers to the region on short notice.

Given the serious consequences of such acts, we felt it our duty, in an act of solidarity with Canadian soldiers, to inform them of their rights and responsibilities, and to ensure that they disassociate themselves from any organization, including their employer, complicit in these crimes.

But an understanding of international and, often, Canadian law, is not something which is well known both to police and soldiers. Captain Daryl Caldwell of the military had been on standby to do a public relations wash over the group, which by this time had staged a die-in across the main entrance, chalking body outlines and anti-war slogans across the pavement, and tying peace symbols and slogans to the high barbed wire fence as police on rooftop took video and photographs. Caldwell explained his agreement that Canadians have a right to express "opinions," but we tried to explain that this was a matter of law, not opinion. 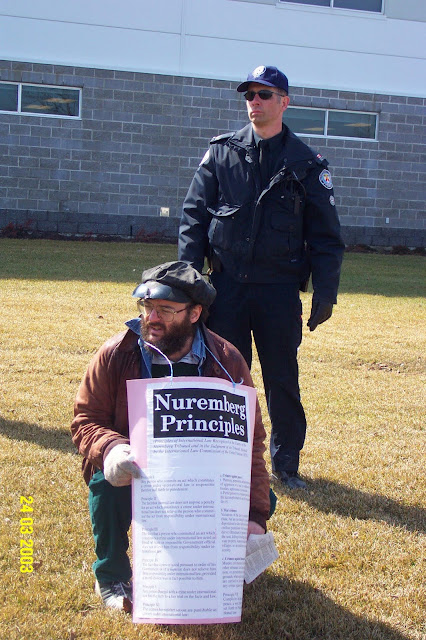 "I just have my orders to follow, and that's what I'm going to do," the friendly gentleman explained. We countered that this was exactly the response which was used by Germans during the post World War II Nuremberg Tribunal, where Principle IV of the eventual judgment clearly stated "the fact that a person acted pursuant to order of his Government or of a superior does not relieve him from responsibility under international law, provided a moral choice was in fact possible to him."

Caldwell was an agreeable fellow, who painfully seemed to get what we were talking about. "In essence, what you guys are saying is that we should commit civil disobedience ourselves," he said at one point, to which we reminded him that such an act would not be disobeying, but an act of civil OBEDIENCE to a body of laws which exist to prevent war crimes.

Caldwell stated we could not meet with him on this day, especially inside the building, where we had no authorization. We showed copies of our authorization--the one from Nuremberg--but he would not budge.

After about 25 minutes of dialogue between SNAG members and the Captain, those with copies of the Nuremberg Principles continued to insist on entering the headquarters and addressing military personnel. We were told, again, that this was impossible, since the whole facility was on lockdown--no one in, no one out, a major snag for the military. 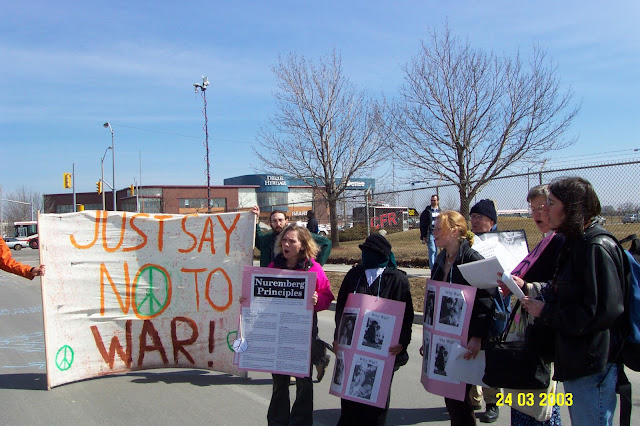 A group which included Raging Grannies, priests, and Dixie Chicks fans then approached one of two vehicular gates, where they were met with a line of squads cars and many police, who told us we were wasting our time, that our message had been heard, and that we must go home. We refused, because we had not gotten the military members to sign a Nuremberg Pledge not to engage in further acts or omissions which would make them culpable before the international legal community.

Feeling that the community of commuters which daily passes the major building on Sheppard perhaps also needed to see this message, we took out pieces of chalk and tried to walk to the front of the structure to begin writing out the Nuremberg Principles on the outer walls of 32 Brigade. We were again followed by a phalanx of police who also tried to be media consultants, explaining to us that we would lose media interest if we were arrested and that we would be hurt if we went any further.

This did not dim the goals of the group, who waded onto the soggy, muddy front area and continued trying to approach the building. Lines of police moved left and right trying to block the protesters, pushing them back, and forcing us to move further west along the site towards a long line of barricades, inexplicably placed halfway down the lawn.

It was an act of relentless persistence, of calmly but determinedly trying to breach the police line and approach the building with the urgent message of Nuremberg. With each effort blocked by police with outstretched arms and other officers grabbing us and shoving us back, we just continued seeking an opening. 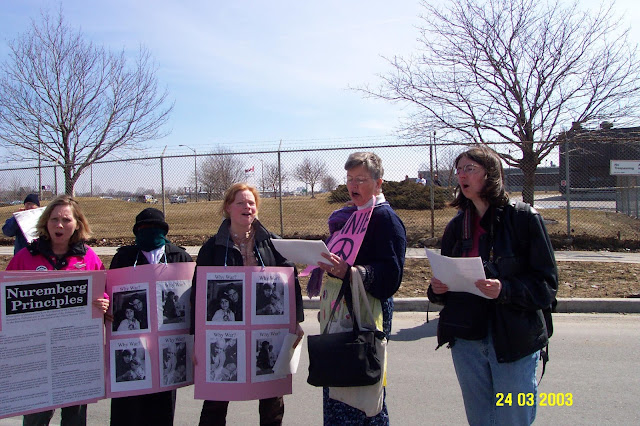 By this point, some media were becoming hostile, some demanding to know why walking about in the muck had anything to do with the war against Iraq. "It is urgent that we as citizens ourselves not be complicit in war crimes; if we leave now, we will not have fulfilled our obligation to interfere with and stop the commission of war crimes," we explained.

Janis Dahl was the first arrested. She had tried to speak to an officer about his duties under the law but, hearing no response, moved to the next in line. By officer number three, she was simply grabbed and placed under arrest. Next in custody was Andrew Loucks, who hopped the barrier and sat down. He was then roughly laid out face down in the muck, a knee in his back and his right arm forced under his body by one officer while another officer demanded that Andrew place his right arm on his back.

The remainder of the group continued working to find an opening, and kept getting met by the roving line of police, who continued pushing us back. Eventually, though, the length of the property was too much for the police, and as police came in prepared to set up with dozens more medal barricades and reinforcements, we were able to breach the line. Subsequently arrested were Father Robert Holmes, Ron Panter and Maggie Panter, Matthew Behrens, Rob Shearer, Matthew Trowell, Donald Bonyer and Stephen Morris. 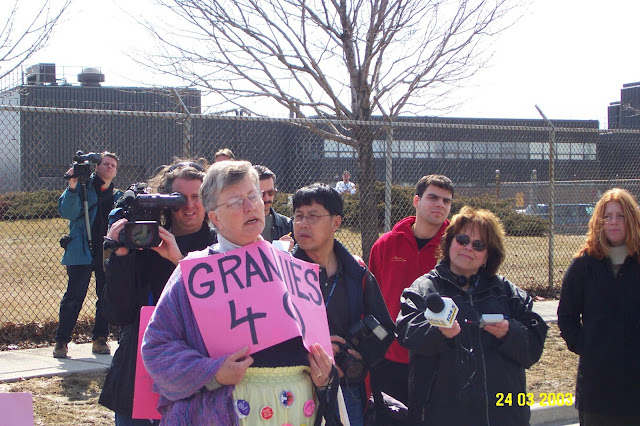 As the arrestees were driven off, the remainder of the group gathered at the main entrance and continued to keep the facility locked down, moving slowly, very slowly, to get their things and move into jail support mode.

All 10 were originally charged with trespassing, handcuffed and stuffed into a police wagon; by the time we were booked into 32 division, what could be known as the Fantino Effect came into play (Julian Fantino is the Toronto chief of police who last week called for a mandatory one-year prison sentence for ANYONE convicted of a demonstration-related offence, as well as for insurance deposits for any group holding a demo and the right of police to deny anyone a permit to hold a march or rally.)

The Fantino Effect is one more name for the criminalization of dissent. Indeed, what was in the end a simple matter of trespass got bumped into the criminal category as the hours in custody dragged on, and by the time of our release, some seven hours later, we were charged criminally, with "obstruction of a peace officer," an interesting charge considering who was obstructing the law on this day. Among the release conditions was an order not to attend within 250 metres of any war dept. facility across Canada, one which we will appeal in a bail review.

The condition was clearly aimed at us, given that we have frequently been at military facilities, both through the weekly Moss Park Armoury vigil and our recent mass sit-in at the Canadian War Dept. in Ottawa. While Homes not Bombs prepares for further direct action against war at the CANSEC weapons fair in Ottawa on April 10, its members are also now gearing up for a series of trials resulting from anti-war arrests, including three facing charges from a protest at military manufacturer Wescam (Burlington), to be tried on April 24, and 10 people facing charges from a protest at weaponsmaker Northrop Grumman (Toronto), to be tried on August 1. (Report from Matthew Behrens of Homes not Bombs) 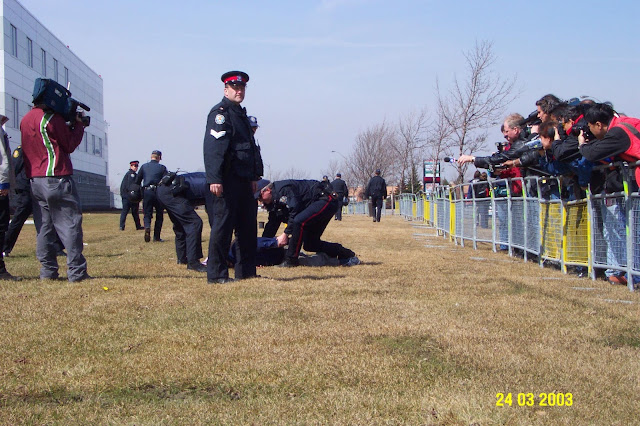