“It’s not about being a hero, it’s about saving lives, and how our health system isn't doing its part for us,” says Shewaybick, a high school teacher and grandfather of 6. Joined by his sons and two other supporters, what Shewaybick calls “a healing journey home” was inspired by the deathbed promise he made to his wife of 26 years, Laura Jean, whose respiratory distress last October could not be properly treated because the local nursing station ran out of oxygen. Her passing at age 51 marked another casualty of what critics call a two-tiered medical system in which Indigenous people continue to suffer from inadequate health care.

“She was loved by so many, and many still grieve,” says Shewaybick. “I will miss her for the rest of my life. My grandkids come here and keep asking, ‘Where’s Grandma?’”

The oxygen tank Shewaybick brought home was symbolic of basic medical devices such as defibrillators, x-ray machines and other diagnostic equipment that are often in disrepair or wholly absent from northern First Nations communities. That serious problem was highlighted February 24 when leaders of the Nishnawbe Aski Nation and Sioux Lookout First Nations Health Authority declared a public health emergency to address “needless deaths and suffering caused by profoundly poor determinants of health” as well as “a level of health care that would be intolerable to the mainstream population of Ontario.” 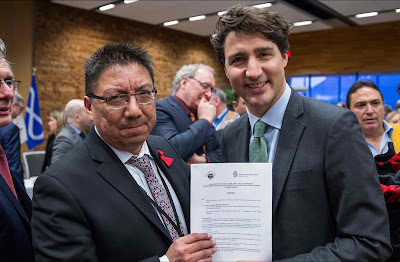 Nishnawbe Aski Nation Grand Chief Alvin Fiddler personally hands a copy of the emergency declaration to Justin Trudeau, but no response yet from the PMO.

The Sioux Lookout region is home to 33 First Nations communities, 80% accessible only by air, with a total population of 30,000. The emergency declaration was built on a litany of misery, with over 600 documented suicides since 1986 (a conservative estimate that does not include countless more serious failed attempts); “rampant” prescription drug use and opioid addiction; chronic diseases like diabetes (with the highest amputation rates in Ontario); severe obstacles to basic child health screening and, when diagnoses are produced, poor access to treatment; lack of proper diagnostic equipment and depleted stocks of basic medications; staff who are not fully trained; and jurisdictional spats over which level of government covers what service.

Shibogama Health Authority director Sol Mamakwa likens his 8 years of work in northern communities to a war zone in which multigenerational trauma and the debilitating legacies of residential schools – combined with alarmingly high rates of substance abuse, mental health issues, and physical disease – have become a toxic mix with severe consequences. He finds  “the status quo has become acceptable and normalized. We have 10-year-old children committing suicide, and our people are living week to week with these serious issues.”

While he does not begrudge them, Mamakwa notes “we are a community about the same size as the number of Syrians who just came to Canada, and it would be great to receive the same sympathy and the same access to health care, to housing, to education.” Instead, the communities he serves are caught in a “jurisdictional black hole” between the federal government and Queen’s Park which, instead of providing desperately needed services, “play ping pong over the health of our people.”

Mamakwa points out health care bureaucracies appear more interested in cost-cutting, noting that despite the vulnerabilities faced by young people, these northern communities can access a resident pediatrician only 5 days per month.

The plight of Sioux Lookout children was highlighted last October by Canadian Family Physician’s peer-reviewed study on incidences of acute rheumatic fever (ARF), long considered a disease of the past. Physicians documented the role of inadequate and crowded housing as well as health care system deficiencies in contributing to at least 8 ARF cases, with an average age of 9 years. Two 4-year-old children died, and the remainder were left with rheumatic heart disease. Despite determining the ARF rate was more than 75 times higher than in the non-Indigenous population, the report barely caused a ripple on the federal election campaign trail.

One of the authors of that report, physician Michael Kirlew, has worked in the north for 9 years. Speaking to NOW just after he gets a patient on a Medevac, he’s furious at the conditions he sees on a daily basis, noting federally-run nursing stations are “providing a standard of care that is far, far inferior to what other Canadians receive in almost every single respect. There’s no checks and balances, and mechanisms for accountability are virtually non-existent. Care is being routinely denied to people, under the non-insured benefits system, which really serves as a gatekeeper to care to decide which patient is or isn't going to get what they need. It’s just egregious. And we also have bacteria that take advantage of social determinants like lack of housing and clean water, so it’s a recipe for disaster.”

Kirlew has also worked in Haiti, Guyana and other overseas locations, and “people’s jaws drop when they hear about these types of situations in Canada. So we need a fundamentally different way forward that is not based on the dynamics of an unequal system that is steeped in 350 years of colonialism. The patient, the community, and its values need to be at the centre, and the system we have right now fails on all three of those points.”

Despite the obstacles, some health care practitioners and community leaders are cautiously hopeful that political rhetoric about a respectful nation-to-nation relationship will translate into concrete action. At last week’s First Ministers meeting in Vancouver, Nishnawbe Aski Nation Grand Chief Alvin Fiddler personally handed a copy of the emergency declaration to Justin Trudeau, reminding the PM of the urgency to address the crisis. While Fiddler hopes to chat soon with federal health minister Jane Philpott, he’s already heard from provincial minister Eric Hoskins, in addition to receiving offers of support from a number of corporate players as well as the Red Cross and Heart & Stroke Foundation.

“I think they’re starting to realize the gravity of the situation,” he says, noting that symptoms of the crisis were further documented in a damning 2015 federal Auditor General’s report. “They found Health Canada does not take into consideration the needs of our communities when allocating their resources. Right now, the funding we get is based on the Indian Health Policy from 1979.”

The Auditor General also found that only one of 45 nurses working in the area had completed all five mandatory training courses, while some 30 separate deficiencies identified by Health Canada itself had not been addressed. In addition, even though Health Canada had defined the scope of essential services necessary for remote nursing stations, there was no proper assessment to ascertain whether they could be provided under existing infrastructure.

“One of the residences at a nursing station that we visited had been unusable for more than two years because the septic system had not been repaired,” the AG report found.  “Consequently, health specialists cancelled their visits to the community.”

Indigenous leaders point out that solving the current crisis in Northern Ontario, as well as other communities across the country suffering similar health care challenges, goes beyond possible funding increases in the federal Liberals’ upcoming budget. Indeed, it will require modernizing outdated policies, community-based consultations, and a holistic approach that, for example, considers colonial legacies, implements the recommendations of the Truth and Reconciliation Commission, respects Indigenous cultures, and tackles racism.

That was the finding of a landmark 2015 Wellesley Institute report, “First Peoples, Second Class Treatment,” which concluded that “Indigenous peoples experience the worst health outcomes of any population group in Canada, underscoring the urgency and importance of understanding and addressing racism as a determinant of Indigenous health.”

That rings true for Mamakwa, who says “cultural safety is really important, and it doesn’t mean putting a piece of woodland art in your doctor’s office. People need to learn who we are, our history, and how institutions like education, health care and prison can sometimes be very racist. People also need to recognize that we are Ontarians, Canadians, First Nations people who are a part of this country. Right now, we don't just need health care. We need care.”

A Call to Recognize on Whose Land We Live


(The following was delivered by Maureen Bostock, of Lanark County Neighbours for Truth and Reconciliation, to Perth Town Council on March 1, 2016. While Perth is celebrating its 200th anniversary, the Algonquin people have lived in this unceded territory for some 8,000 years. The establishment of the Town was in contradiction to British law and the Royal Proclamation of 1763, which stated that no land could be granted to settlers without a prior agreement between First Nations and the Crown.) 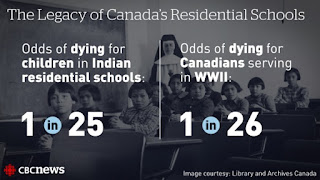