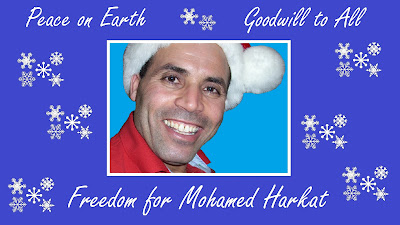 Please send a season’s greeting card or letter to Public Safety Minister Bill Blair to stop the persecution of Ottawa refugee Mohamed Harkat, still fighting to end his deportation to torture and win his long-deserved permanent residence (samples below. No postage needed!). December holidays are rooted in freeing the captives, bringing good news to the poor and brokenhearted, and liberation of the oppressed. You can send the greetings postage-free, and it will have far more impact in the age of electronic communication. Sample messages are below.

Starting December 10, 2002, Mohamed (Moe) Harkat was illegally held for 43 months in maximum security detention without charge on secret allegations he was not allowed to properly contest. He was held under legislation unanimously found to be unconstitutional by the Supreme Court of Canada in 2007.

He was “released” in 2006 on the strictest bail conditions in Canadian history, and while they have lessened, they are still incredibly intrusive and humiliating 14 years later.  The original “evidence” against Mr. Harkat was destroyed by CSIS, and the allegations against him are based on two secret informants – one failed a lie detector test and the other had an affair with his CSIS handler – who were never cross-examined in court.

If this had been a regular criminal trial, the term “wrongful conviction” would fit perfectly. This is all grossly unfair. Moe is a United Nations Convention refugee who has lived in Canada for 25 years. If deported, he faces the risk of imprisonment, torture, and possibly death in Algeria. Courts in the UK and Ireland have barred their governments from deporting people to Algeria who face a substantial risk of torture. Canada must do the same in Moe’s case.

On October 26, 2017, Prime Minister Trudeau clearly stated: “Nobody ever deserves to be tortured. And when a Canadian government is either complicit in that or was not active enough in preventing it, there needs to be responsibility taken.”

The threat to deport Moe violates Canadian law and the UN Convention Against Torture (which outlaws deportation to torture under any circumstances, without exception).

Under the law, Public Safety Minister has the power to allow Mr. Harkat to stay in Canada. We are urging him to use this power today to allow Mohamed Harkat to remain in Canada and live his life, safe from fear and torture, with his wife and community.

Please send a holiday greeting with which you are comfortable, and add in a personal message. Some sample messages are below.

1. Mail your card/letter postage free to

2. Please send a quick note to tasc@web.ca so we can keep track of how many cards are being sent.

3. To double the impact of your physical card/letter, please take a very quick moment to send an automated email to Minister Blair and your MP, to mark the 18th anniversary of Moe's unjust arrest on International Human Rights Day, and call for the end to his deportation to torture. It’s easy. Simply click and sign here:

a. “In this time celebrating peace and good will to all, please show some good will to Mohamed Harkat this holiday season by ending his deportation to torture proceedings and granting him permanent residence.”

b. “In this season, many celebrate an event described in Isaiah as the birth of someone whose life would be about the mission "to bring good news to the poor, to bind up the brokenhearted, to proclaim release for captives, and liberation for prisoners.” You can act in that same loving spirit by ending the deportation to torture proceedings against Mohamed Harkat and granting him permanent residence.”

c. “Hanukkah marks the ongoing struggle for liberation in the face of oppression. In the case of Hanukkah the oppression was attached to both religion and nationality. In the case of Mohamed Harkat, his identity as a Muslim refugee made him a racial profiling target and continues to be used to persecute him. During the Festival of Lights, many celebrate the mitzvah of pidyon shvuyim, the freeing of captives. It is long past time to free Moe Harkat from the shackles of unending surveillance and the threat of deportation to torture. Grant him permanent residence now.”

“There weren't any trumpets, the night was quiet and dark as pitch, no heavenly choir sang. It was a moment of crisis, of abandonment, of loss, of total dependence for this little family. They knew too much of what the families of the world know yet, in fact. This was a refugee family. They were homeless. In a highly communal society their survival depended on the hospitality and support of strangers. That's the real story. Where has it been for so long?” – Sister Joan Chittister