By Matthew Behrens
Twenty-five years ago, some friends and I poured our blood on the executive office windows of Rexdale’s Litton Systems, which manufactured guidance systems for cruise missiles that were used for the very first time in Gulf War I against the Iraqi people.

It was likely the first time Canadian media showed bloodshed in covering that one-sided conflict – Operation Desert Storm began on January 20, 1991 –  and that was precisely the point. Military briefings of the time portrayed a “clean” war that looked as harmless as a high-tech Nintendo game. Generals cracked jokes showing footage of bombs hitting targets that looked no different than animated gaming figures at a Yonge Street arcade. 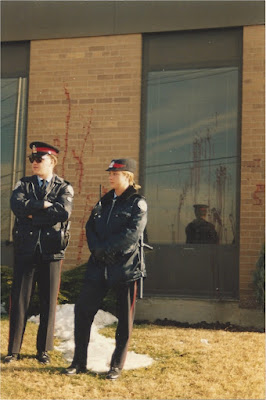 Blood Drips from Litton's Windows and Police Look on, Post-Arrest

Today, while Canadian CF-18s continue to drop 500-lb bombs on Iraq in 2016, three  months after Justin Trudeau promised the air assault would end, Canadian media outlets have looked back at Gulf War I through a feel-good lens that ignores the subsequent human cost and regional instability that resulted. While Postmedia’s Matthew Fisher calls it a “good” conflict, the Toronto Star’s quirky “odd details” retrospective focused on sand hockey and care packages of gloves and scarves sent to the middle of the desert.

Ignored is Canada’s almost continuous military and diplomatic role since then in the loss of over 2 million Iraqis lives through direct warfare and 1990s economic sanctions so draconian that the UN’s Humanitarian Coordinator, Denis Halliday, condemned them as genocidal.

Iraq’s invasion of Kuwait in August, 1990, was a political godsend, allowing Washington to craft a new enemy – Hussein as Hitler – and to direct funds from the post-Cold War “peace dividend” into the coffers of the world’s largest weapons manufacturers. With the Red Menace no longer providing the raison d’etre for militaries and spy agencies, gears shifted rapidly to haul up some old standbys who have served the role of boogeyman ever since – Arabs and Muslims.

The Kuwait invasion provided then PM Brian Mulroney an opportunity to utter self-righteous pieties about illegal occupations of sovereign territories, missing the irony that the Conservatives had in fact had engaged in the same behaviour that summer by sending in 2,600 Canadian troops to occupy sovereign Mohawk land during the Oka crisis.

A Manufactured Crisis
The lead-up to war intensified with a fake PR campaign about Iraqis ripping babies from Kuwaiti incubators (a creation of the notorious Hill & Knowlton, whose then-Canadian head is Trudeau’s new ambassador to Washington.). It also featured an especially pugnacious Joe Clark leading the charge as Canada’s External Affairs Minister, from which perch he said Canada would fight with or without UN authorization. He labeled as “counterproductive” any pledges that Allied forces would not use nuclear weapons against Iraq, and ordered 800 body bags.

Canada’s cynicism about a diplomatic solution was also clear, as a healthy chunk of change to pay for the war was set aside very early on, cutting $500 million in social programs in the process. London, Ontario’s General Motors promised it could switch from civilian to military production on a dime, and within a year its assembly line was rolling out the first of over 2,000 armoured vehicles for Saudi Arabia.

While anti-war demonstrations broke out across the country, CSIS and the RCMP stepped up an intensive, racially-targeted home and office door-knocking campaign that prompted the Canadian Arab Federation to produce a rights handbook, “When CSIS Calls.” When the  Toronto Sun produced unsubstantiated scare headlines like “Iraqi Agents Here”, falsely claiming a dozen saboteurs were lurking in the city, the results were predictable: among many such incidents of violence and vandalism, an Arabic teenager at Father Henry Carr High School was beaten by 10 white students as passersby stopped to watch. 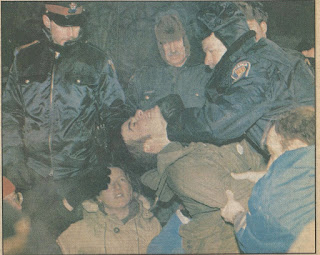 As it appeared the U.S.-led coalition was hellbent on war at all costs, the Alliance for Nonviolent Action (a coalition in which I was an organizer) called for direct action at military bases and for a shutdown of the main political voice for war, Clark’s Ottawa External Affairs building. The RCMP threatened us with treason charges, and when the Toronto Star’s front page printed my home phone number to reserve seats on buses headed to Ottawa, there began a round-the-clock barrage of death threats that reflected a visceral hatred whipped up by politicians and press alike. As we journeyed to Ottawa, the public mood was a toxic mixture of fear, anger, and despair, with headlines about terror threats and chemical weapons producing an end-times feeling.

Police Abuse at External Affairs
After sleeping on a church floor, about 300 of us ventured out into an early morning Ottawa -35 chill to blockade the Pearson building. Among our number was 78-year-old World War II veteran, Eldon Comfort, who wore his medals as he, like the rest of us, was roughed up by a police force that hoped to freeze us out during the 4.5-hour demo, figuring we'd tire of being beaten up and frostbite (they eventually arrested only 5 people). One church group turned away by our blockade, which had gone for a meeting on human rights, was so appalled by our mistreatment that they issued a statement decrying "the violent abuse" of our peace blockaders, noting "our very credibility as supporters of human rights overseas is undermined by our own government's handling of this demonstration."

Some supportive employees refused to cross the blockade, with one cafeteria worker asking why Clark and Mulroney weren’t on the front lines overseas if they supported the war so much. Clark’s motorcade tried entering but was turned away, and when he later declared to the House of Commons that our blockade had proven “counterproductive” to the workings of Canadian foreign policy, we took it as an official acknowledgement of the effectiveness of our actions. For the first time, Canadians had successfully interfered with their government’s operations during wartime.

Despite the success of our action, we felt the sense of gloom that permeated the peace movement for, despite our collective efforts, the bombardment of Iraq, where 50% of the population was under the age of 16, continued relentlessly. Subsequent demo numbers in Toronto declined significantly.

By the time we ventured to Litton on February 4, only 30 people were there to protest at the same site where thousands had gathered throughout the 1980s, with 11 of us arrested. That night, we were held at Metro West Detention Centre, where, triple bunked, we were the only white people on the range. Racist guards had shown us pictures of our black cellmates in advance, warning us that we would be beaten because they allegedly didn’t like peace protesters. 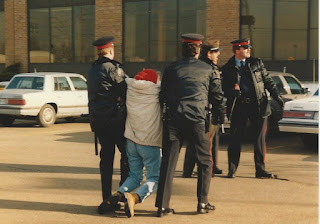 But we were not beaten. Rather, at about 2 am, a soft, rhythmic chanting began that bounced off the walls in a ritualistic echo that I couldn't put my finger on. One of my cellmates explained that there were a lot of Rastafarians on the range, and that they were praying for us because, he said, “you guys did a righteous thing today.” It was one of the most humbling moments of my life to be with a group of men who had been caged for weeks, months, and years, many on immigration holds, praying for a group of relatively privileged people who would be out in a day or two.

News in Baghdad
Upon our release, we were informed that our blood-pouring was a Baghdad radio news item repeated every hour we were held. I imagined frightened families in bomb shelters perhaps feeling some slight hope that someone, somewhere, cared about what was happening to them. Nine days later, one such shelter, Baghdad’s Amiriyah, was a deliberate target of two U.S. 2,000-pound laser-guided “smart” bombs that incinerated over 400 civilians trapped inside, their shadows permanently etched into the concrete like images from Hiroshima.  It now serves as a war memorial where Umm Greyda, who lost 8 of her children in that bombing, lives and acts as a caretaker.

Such horror stories were a constant during the war, which officially ended in March, but it took time for them to filter through the party atmosphere of “victory”. One story we happened upon by chance was relayed to us by a nurse at a spring anti-war event in Orillia. When she discovered we had been at Litton, she told us about a former patient who’d suffered from a series of mysterious, seemingly untreatable debilitating ailments. Turns out he was one of the men in the Litton management building who saw our blood dripping down his window. A light bulb went off as he discovered what he had suppressed for so long: that bloodshed was the ultimate result of his life’s work. He got better, left Litton and moved away to start a day care.

During bleak times, I think of those prisoners, the former Litton employee I never met, and Umm Greyda. They remind me of our responsibility to the vulnerable and targeted, as well as the power we have to change individual lives or, at the very least, provide some hope in troubled times.

Trudeau's Ongoing War
As Trudeau announces new plans for waging war with a different face, it remains what it is: war. Refueling and aerial reconnaissance are simply bombing by proxy. Training to kill in a nation that has known nothing but killing for more than a quarter century serves no purpose whatsoever, unless you invest in weapons manufacturers.

This past weekend, Canadian bombers dropped 500-lb bombs on the devastated town of Ramadi, similar in size to Kitchener Ontario. It was the 57th Trudeau bombing run since the election. Since he came to power, as many as 70 civilians have been killed by bombing runs in which Canadian aircraft took part. The blood of each of them is on the PM’s hands. And ours.

After all this bombing, rebuilding Ramadi alone will cost $12 billion. But the UN fund for Iraqi reconstruction only has approximately $50 million, or only one-tenth of what Canada has officially spent since 2014 to bomb Iraq and Syria. In addition to the scores of civilians murdered by bombing runs in which Canadian bombers have taken part, the ongoing toll on subsequent generations of Iraqis trying to rebuild their lives in incalculable. Diverting Canadian funds that could have built affordable homes in Canada to blowing them up in Iraq has equally lethal consequences for those freezing to death on Canada's streets.

Nothing Trudeau announces in his "wholistic" approach to warfighting will change the circumstances. The only positive contribution right now is to pull out all Canadian military forces, including bombers, refueling and spying aircraft, and those on the ground who train to kill. Please email Trudeau if you agree: the only way to end war is to stop waging it. http://pm.gc.ca/eng/contactpm 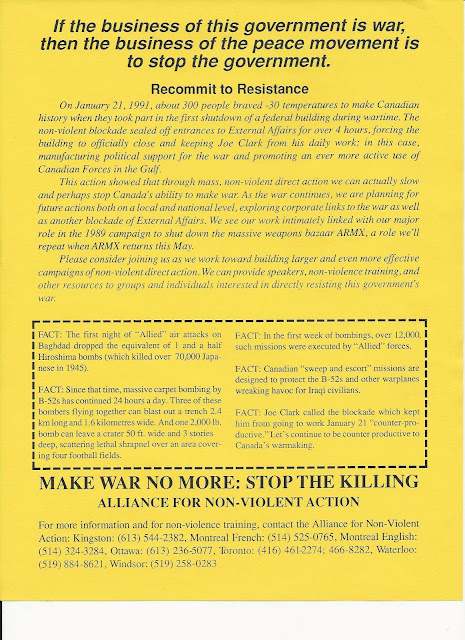 Thank you for your courage Matthew and the insightful article. It doesn't seem to matter who we instal as Prime Minister - the war machine continues to roll forward. The sterilized news coverage is only now shifting slightly with the alternative media. Information like yours helps to wake up Canadians who hardly know that we are directly involved in these conflicts and have blood on our hands as long as we sit back and do nothing.