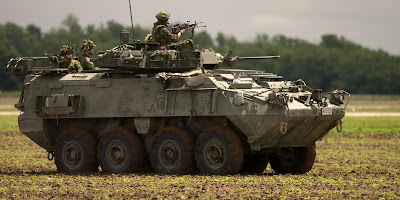 Justin Trudeau calls this a jeep.

The day after his October election, a tired Justin Trudeau rallied delirious Liberal troops in Ottawa with a promise that the decade of Harper-era cynicism was over, proclaiming, “Many of you have worried that Canada has lost its compassionate and constructive voice in the world over the past 10 years. Well, I have a simple message for you on behalf of 35 million Canadians. We’re back.”

Now that the cheering has died down, Trudeau’s rhetoric is facing its first major road test as his government refuses to tear up the largest military contract in Canadian history, a $15 billion blockbuster signed by the Conservatives in 2014 to supply Saudi Arabia with weaponized armoured brigade vehicles. The Saudi beheading of 47 people to start 2016 has rocketed what was for a short time a thorny federal election debate topic back into the spotlight, raising many questions about the secret contract undertaken by London, Ontario’s General Dynamics Land Systems (GDLS).

While the Toronto Star last week uncovered a foreign policy briefing book advising the new PM to keep Saudi Arabia as an all-weather friend that would “serve Canadian commercial and possibly security interests,” Foreign Affairs Minister Stephane Dion insisted to CBC that “what is done is done,” and that Ottawa cannot interfere with what he calls a “private-company contract.”

“That’s just insulting to anyone who knows the facts,” says the Rideau Institute’s Peggy Mason, a former Canadian Disarmament Ambassador to the UN.  “First off, the deal is between a Crown corporation, Canadian Commercial Corporation, and the Saudi Royal Family. Secondly, whatever type of contract it is, that in no way absolves the government of its duty to uphold Canadian export control policy.”

That policy, as the Global Affairs Canada website explains, “strives to ensure that Canadian military exports are not prejudicial to peace, security or stability in any region of the world or within any country.” They're also designed to control exports to countries “whose governments have a persistent record of serious violations of the human rights of their citizens, unless it can be determined that there is no reasonable risk that the goods might be used against the civilian population.”

But the supply of over 2,000 Canadian-built armoured vehicles to the Saudi regime – a cosy relationship that dates back to 1990 – has not only bolstered that country’s National Guard, whose job is to control the domestic population. It also appears to have facilitated the 2011 Saudi intervention in Bahrain to put down that nation’s pro-democracy Arab Spring protests. Refusal to cancel the contract also sends a supportive message that green lights Saudi military actions in Yemen, which human rights groups have condemned as war crimes.

While the Liberals have attempted to downplay the ferocity of the military equipment – Trudeau famously called them jeeps, earning a stiff rebuke from Gilles Duceppe during the French-language leaders’ debate – the Globe and Mail reports that a Belgium supplier will be outfitting the armoured vehicles with a 105 mm cannon described as a “high-pressure gun with an advanced autoloader to deliver high lethality at very light weight.”

The longstanding Canada-Saudi relationship has not only resulted in a windfall for London’s GDLS; it's also led to significant legal changes that have bolstered Canada’s weapons export industry. Indeed, following the first Gulf War against Iraq in 1991, Canada ignored calls for regional disarmament, instead making Criminal Code changes at the behest of two weapons dealers, Kitchener’s Diemaco (now Colt Canada) and GDLS’s predecessor, General Motors Diesel Division. These allowed the companies to import and possess automatic weapons (which were attached to the first Canadian batch of Saudi-bound armoured vehicles) and granted permission for their production and export as well.

At the time, the opposition Liberals were on a different track, even presenting a 1993 paper – Defence Conversion, A Liberal Priority – which sought to "encourage Canadian defence companies to adjust and move away from a dependence on military production and export." But once the Liberals regained power later that year, Canadian weapons sales continued their meteoric 1990s rise to a host of human rights violators, including Indonesia, Algeria, Colombia, and Egypt.

Because the new contract is secret, it is unclear what legal and economic ramifications would ensue if it were cancelled. Ken Epps of Project Ploughshares, the Waterloo-based research and policy organization that has worked tirelessly to expose the deal, says that the Saudis “often write into their contracts that no information about it will be made public,” which is why GDLS appeared caught off guard when then Industry Minister Ed Fast publicly announced the deal.

Epps says liability remains an open question; if there were a break in the contract, the Canadian Commercial Corporation, the globetrotting federal agency that acts as a broker for Canadian military firms, could be held liable by both the Saudis and GDLS. Also unclear is whether, when the Conservatives announced that they had won over several competitors, the final decision was strictly economic, or those other potential suppliers had raised human rights concerns regarding the end-use of the vehicles.

The latter consideration is a compelling one given that Canada is the only NATO member not to have signed on to the 2014 Arms Trade Treaty (ATT), which lists among controlled items of concern armoured combat vehicles. Stephane Dion’s shrugging comment that if Canada cancelled the contract, other countries would be lining up to fulfill it, rings hollow. “If Canada were to join the treaty and deny the vehicles to the Saudis, there are mechanisms within the treaty that could then put pressure on other potential suppliers not to step in,” Epps explains. “The intention of the arms trade treaty was to get at the argument that if we don't supply this stuff, someone else will.”

The ATT would provide additional heft to Canada’s broadly interpreted export guidelines (which allowed 2013 weapons sales to Egypt, Israel, Libya, Oman, Saudi Arabia, Thailand, the UAE, and Algeria). It would also strengthen the efforts of those groups seeking to take legal action to prevent weapons exports. Dion has not mentioned it, but his ministerial mandate letter clearly directs him to have Canada sign on.

Given the latest round of global outrage over Saudi behavior at home and in Yemen, a Canadian reconsideration could in fact change the regional picture significantly. Indeed, major weapons-exporting countries like Germany and Sweden have in the last few weeks either suspended or deferred weapons sales to the Saudis, while Belgium has refused the latest Saudi request for weapons (though it can justify its production of the 105 mm cannons for the armoured vehicles because those are not going directly to Saudi Arabia, but rather to Canada). Any NATO member with the capacity to produce the armoured vehicles would likely face considerable domestic resistance to bidding on a cancelled Canadian contract.

The Liberals are not likely to face Parliamentary heat over the deal, given the Conservatives signed it and the NDP is reticent about provoking a rift with the union whose workers currently produce the vehicles (the party’s foreign affairs critic, Helene Laverdière, did email a statement that “We categorically must do better going forward” by, for example, signing the ATT). Last fall, a London Unifor representative reportedly called on NDP leader Tom Mulcair to keep the issue under wraps, but the topic has been discussed at a number of recent London Labour Council meetings, where human rights concerns are pitted against thousands of good-paying jobs and GDLS donations to local charities.

It sounds like a scenario out of G.B. Shaw’s famous anti-war play Major Barbara, which decried the kind of system that forced workers to choose between going hungry and building weapons used against their overseas comrades.

London trade unionist and peace activist David Heap is particularly attuned to the complexity of the issue.

“It’s important not to single out workers at a particular plant for economic decisions that involve all of us, because we are all responsible,” says Heap, who was involved in a 1980s campaign to convert the cruise missile producing Litton Systems in Rexdale to civilian use. “What we need is a collective effort to create a green peaceful economy where good jobs in our communities do not depend on developing and building machinery used to make war."

Heap notes that before GDLS got on board the Saudi weapons assembly line, the London plant built locomotives, and that for a federal government pursuing green alternatives, a massive investment in railway infrastructure could keep those good jobs in London.

“In terms of job creation, military manufacturing is the least efficient kind of investment possible,” he says.

But for now, the Canadian Commercial Corporation (CCC) has no plans to stop its global tour seeking out new markets for Canadian weaponsmakers. Last year, it was active in 57 countries while attending the world’s largest weapons fairs, with plans to host international delegations at the CANSEC weapons bazaar in Ottawa at the end of May.

At press time, the CCC had yet to return repeated email requests for answers to a series of questions that raised what human rights standards were used in brokering weapons deals with dictatorships, how the Saudi deal squares with current export control guidelines, what conditions would lead CCC to cancel a contract, and whether, given a major, jobs-producing, cash-on-the-barrelhead deal, CCC would act to provide weapons to another mass execution group in the region, ISIS.

May 2015: The Globe and Mail reported, “Asked if it believes the Saudis used made-in-Canada LAVs when they went into Bahrain, the Canadian government doesn’t deny this happened.”